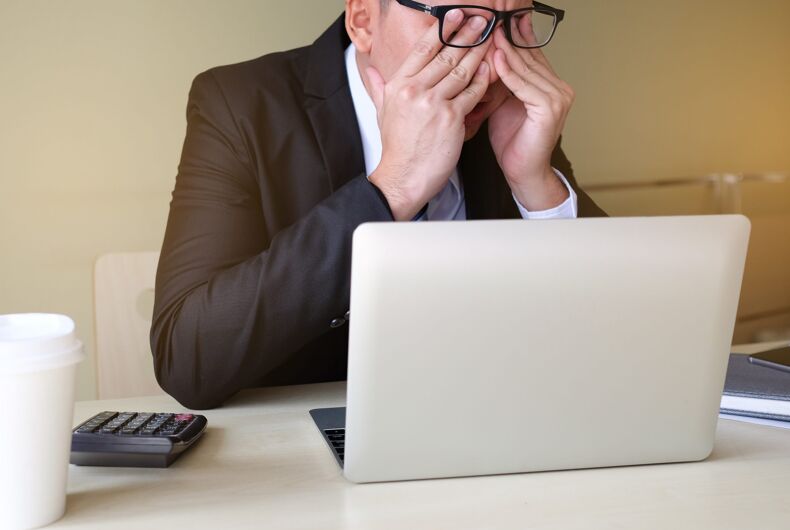 After anti-LGBTQ, racist, and anti-Muslim social media postings were unearthed, California congressional candidate Ted Howze has become too toxic for even the GOP. Both the state party and the National Republican Congressional Committee have yanked their support.

But House Minority leader Kevin McCarthy, despite calling the candidate’s postings “bigotry and hateful rhetoric,” did not pull his endorsement. Instead, he would only promise to take “immediate action… if Mr. Howze is found to be the originator of these posts.”

It was the second time his history online has spawned controversy. When similar postings surfaced earlier this month, Howze apologized for the “ugly ideas” expressed in the posts, but blamed them on unnamed people who had access to his account.

This time around, Howze isn’t even attempting to pull a second half-hearted mea culpa. Instead, he labeled a Politico article on them “fake news”

“These are false attacks about social media posts several years old that I did not write, and which do not resemble anything close to my decades-long record of serving dairy farms, coaching, and living in the Central Valley,” said after the site reported the other offensive posts.

“Instead of talking about these Brett Kavanaugh-like character smearing attacks, we ought to be talking about getting people back to work and making life more affordable for Central Valley residents.”

“Mr. Howze’s social media posts recently revealed through news reports are disgraceful, disgusting and do not represent the values we hold or the Party we are building,” Jessica Millan Patterson, the chair of the California Republican Party, said while announcing they were pulling their endorsement and support.

“The content in question on Mr. Howze’s social media channels is disappointing and disturbing,” McCarthy said in a statement to The Modesto Bee. “Bigotry and hateful rhetoric — in any form — have no place in the Republican Party. These posts are unacceptable and do not reflect the Mr. Howze that I have briefly interacted with.”

The first batch of unearthed postings attacked Muslims, immigrants, LGBTQ people, and the Black Lives Matter movement. The second round disparaged Muslims, the Black community, and the LGBTQ community, mocked a survivor of the Parkland school shooting, and suggested without evidence that Hilary Clinton was linked to a murder.

Some of the posts in the second batch were signed, “Ted Howze American Citizen.”

The district is considered a competitive one. Democrat Josh Harder currently holds the seat.

We all know the #FakeNews media is joined at the hip with the Democrats. They don’t even hide it! Now they are after me again with false & ugly accusations trying to break our spirit. They want to hurt Republicans & @realDonaldTrump. Stand up to them now!