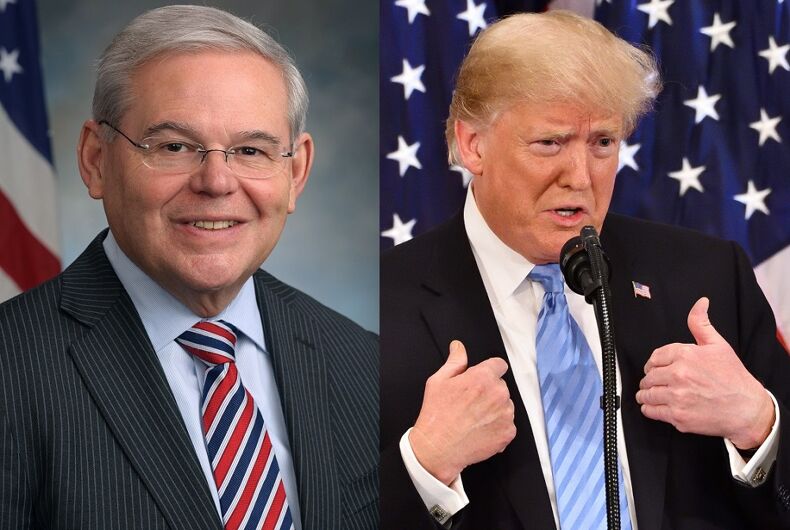 Thirty Senate Democrats and one Independent have signed a letter urging the Trump administration to roll back a rule that makes it easier for health care professionals to refuse to treat LGBTQ people during the COVID-19 pandemic.

For the past year, HHS has been working to change regulatory guidelines for Section 1557 of the Affordable Care Act, which bans – among other things – discrimination on the basis of sex. The Obama administration’s rules say that discrimination because of sex includes discrimination based on sex stereotypes, gender identity, previous termination of pregnancy, and other, more specific forms of sex discrimination.

In April, Politico reported that HHS was in the process of finalizing the rule change, which would roll back many of the protections that the Obama administration enacted.

“The proposed policy changes would falsely suggest to health care providers and insurers that they can refuse to care for LGBTQIA+ patients – including testing and treatment for COVID-19 – based on who they are,” the Senators wrote in the letter.

“The sudden uptick in at-home deaths in COVID-19 hot spots indicates how dangerous it can be for people with severe cases of COVID-19 to delay seeking care,” the Senators wrote. “If HHS finalizes this proposed rule, members of the LGBTQIA+ community suffering from COVID-19 – especially people who are transgender, gender nonbinary, and gender nonconforming – may face significant barriers to timely care.”

The letter also calls out HHS for other proposed changes that would limit protections for women, people who don’t speak English well, and disabled people.

“It is absolutely unconscionable that HHS is issuing rules assaulting some of the most vulnerable members of the LGBTQ community during a national pandemic, including transgender people seeking health care,” said Denise Brogan-Kator of Family Equality in a press release, adding that the rule “sends a dangerous and false message to health care providers that they can turn away LGBTQ patients, at a time when delaying or not seeking care can be a matter of life or death for those with severe cases of COVID-19.”

“We are grateful to Sens. Menendez and Murray and all of the signatories for drawing attention to the dangers this rule poses to our families and for pressing HHS not to take any steps that would limit access to health care at this critical time.”

The full text of the letter is below.

We write to express our deep concern about the Department of Health and Human Services’ (HHS or the Department) intent to finalize the proposed rule (RIN 0945-AA11) implementing Section 1557 of the Affordable Care Act (ACA). Section 1557 prohibits discrimination on the basis of race, color, national origin, sex (including, but not limited to, discrimination on the basis of pregnancy, false pregnancy, termination of pregnancy, or recovery therefrom, childbirth or related medical conditions, sex stereotyping, and gender identity), age, disability, and language proficiency in any health care program or facility that receives federal funding. The misguided changes in the proposed rule would gravely undermine health care anti-discrimination protections for LGBTQIA+ people, women, people with limited English proficiency, people with disabilities, and others, including those who face multiple forms of discrimination. While these policy changes would be harmful at any time, finalizing this proposed rule during the 2019 novel coronavirus (COVID-19) pandemic will reduce vulnerable communities’ access to health care services in the middle of a global health emergency. The Department should be focused on helping people obtain the health care they need, not on helping others discriminate against patients and deny them that care. We strongly urge you to reconsider this proposed rule.

In 2019, HHS undertook a harmful and unlawful rewrite of the implementing regulations for Section 1557 of the ACA. HHS recently submitted the final rule for review by the Office of Management and Budget, indicating HHS may have immediate plans to publish the rule. Specifically, the proposed rule hinders the administrative enforcement of protections against discrimination on the basis of sexual orientation and gender identity. The proposed rule would unlawfully incorporate an exemption to the ACA’s protection against sex discrimination, targeting patients who will need abortion care. The proposed rule would also reduce patients’ access to critical health care information in their primary language, weaken requirements for accommodations for people with disabilities, deprive patients of notice of their right to file a grievance, create confusion around appropriate legal standards and available remedies for claims involving intersectional discrimination, and could purport to exempt many health care programs from the law altogether.

The proposed policy changes would falsely suggest to health care providers and insurers that they can refuse to care for LGBTQIA+ patients – including testing and treatment for COVID-19 – based on who they are. The LGBTQIA+ community already experiences severe discrimination in health care, and finalizing this rule as proposed would heighten existing barriers to care during a public health emergency. According to one study, eight percent of lesbian, gay, and bisexual adults and 29 percent of transgender adults report a health care provider had refused them service due to their actual or perceived sexual orientation or gender identity. Another study found that 28 percent of transgender or gender nonconforming people had postponed medical care due to discrimination and disrespect. The sudden uptick in at-home deaths in COVID-19 hot spots indicates how dangerous it can be for people with severe cases of COVID-19 to delay seeking care. If HHS finalizes this proposed rule, members of the LGBTQIA+ community suffering from COVID-19 – especially people who are transgender, gender nonbinary, and gender nonconforming – may face significant barriers to timely care.

The proposed rule has wide-ranging and harmful implications beyond the efforts to undercut protections against discrimination based on gender identity and sexual orientation. The proposed rule attempts to create broad religious exemptions and unlawfully incorporates the Danforth Amendment and the religious exemption from Title IX of the Education Amendments of 1972. Additionally, the Department refused to clarify in the proposed rule whether it would enforce protections against discrimination because someone is miscarrying a pregnancy or seeking care after having an abortion. This could embolden providers to turn away patients who have had abortions, who are pregnant and unmarried, or who are seeking miscarriage management care. Without administrative enforcement of these protections, women with limited options for health care, particularly those who already face barriers to care, including Black women, indigenous women, and other communities of color, as well as those who live in rural or underserved areas, could face additional barriers to accessing health care.

The proposed rule seeks to weaken requirements that health care providers take reasonable steps to provide access for patients with limited English proficiency, such as including taglines on written documents and posting notices about the availability of interpreters. The proposed rule also sought comments on several proposals to weaken protections for people with disabilities. For example, HHS requested comments on a proposal to exempt small entities from a requirement to provide auxiliary aids and services to people with disabilities. As a result, patients with limited English proficiency and patients with disabilities could be erroneously denied equal opportunity to access information about their own health and health care decisions.

Undermining health care anti-discrimination protections at any time is cruel, but to do so now will have deadly consequences for some of the populations that are most vulnerable during this pandemic. Congress designed Section 1557 of the ACA to expand—not reduce—access to comprehensive health care for all people. By moving away from the express intent of Congress, these policy changes will cause real harm to our most vulnerable patients. We urge you to abandon this effort and instead focus on ensuring all Americans can access the health care they need during the COVID-19 public health emergency. Thank you for your consideration of this urgent matter.