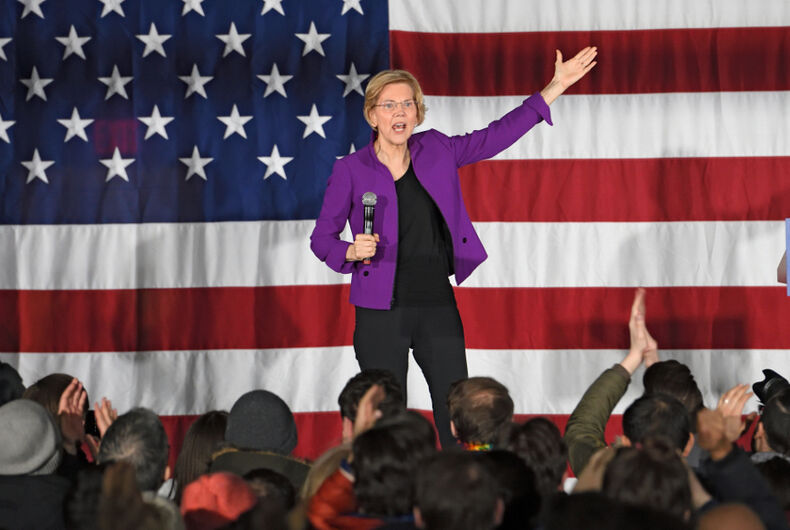 In the wake of Republican efforts to roll back Obama-era protections for transgender healthcare, Democratic presidential candidate Elizabeth Warren wrote in a recent tweet, “Everyone should be able to access high-quality, affordable, gender-affirming health care.”

Everyone should be able to access high-quality, affordable, gender-affirming health care. But the Trump administration is trying to roll back important protections for trans Americans. Help fight back by leaving a comment for HHS in protest: https://t.co/pKDcOqbsc7

She then linked to ProtectTransHealth.org, a website which encourages people to submit a comment on the federal register until midnight on August 13th.

Related: Trump is already being sued over his plan to allow healthcare workers to discriminate

According to The Washington Blade, the Department of Health & Human Services (DHHS)  is considering  a proposed rule change for enforcement of Section 1557 of the Affordable Care Act which would “roll back an Obama-era rule interpreting Obamacare, which bars discrimination on the basis of sex in health care, to apply to cases of anti-trans discrimination, including the denial of transition-related care and gender reassignment surgery.”

The DHHS has reportedly received hundreds of thousands of comments opposed to the rule change; three comments came from a coalition of 125 House Democrats, the American Medical Association and 22 state attorneys general, reports The Washington Blade.

The 125 House Democrats submitted a formal letter that said:

“The proposed rule would embolden discrimination against [LGBTQ] people, including those who are nonbinary and gender nonconforming…. An estimated two million transgender patients, who already face significant barriers to care, could be unlawfully denied access to the cafe they need or forego care entirely for fear of discrimination.”

The letter adds that the proposed rule change would allow religiously-affiliated health care entities to refuse contraception to patients because they’re not married, are in a same-sex relationship or are transgender. It would also get rid of language access protections for patients with limited English proficiency.

“Let me be clear,” Democratic U.S. House Representative Barbara Lee said in a statement. “Patient care should be determined by what’s best for the patient, not a provider’s personal beliefs. This proposed rule would place even more barriers to care for groups who need it the most, especially LGBTQ+ people, people needing reproductive health care, those whose first language is not English, people of color and people with disabilities.”

This gay bar owner is a Trump supporter. Now he’s running for Congress against an LGBTQ ally.

A trans student had top surgery. His college said that was ‘sexual perversion’ & kicked him out.