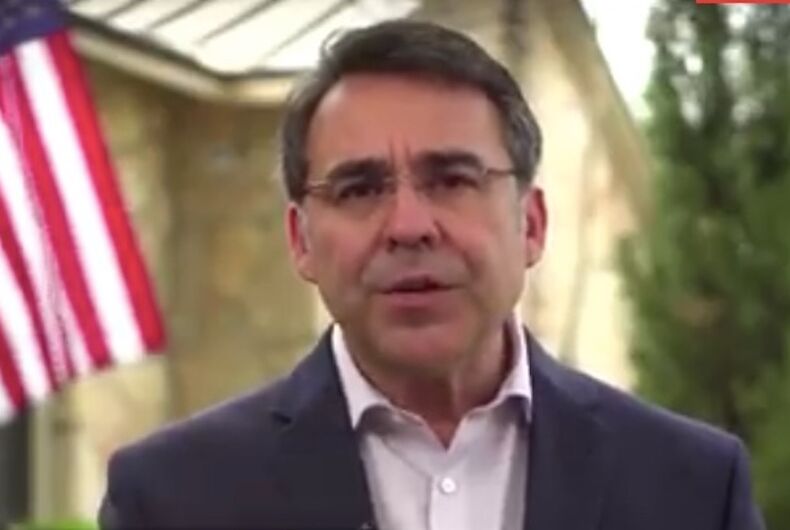 Mauro Garza, owner of the Pegasus nightclub in San Antonio, is running as a Republican for a Texas congressional seat even though he failed in his 2018 campaign. Garza would face LGBTQ ally Joaquin Castro in the general election if he wins the primary.

Garza ran in the neighboring congressional district last year. He is a self-proclaimed conservative and Log Cabin Republican whose most recent campaign for office was self-funded, using red ballcaps which read “Make TX-21 greater” as both a nod to his district and his support of Donald Trump.

He also owns one of the country’s top gay bars, Pegasus Nightclub.

Related: A shooting at Texas gay club was started by a racial slur

The San Antonio LGBTQ community is fighting back against Garza’s campaign, saying that he’s working hand-in-hand with the anti-LGBTQ Republican party to oppose civil rights for multiple communities. They’re calling for a boycott of Pegasus.

A group called “Protest the Peg” has put out a call for locals to avoid the nightclub and called out former RuPaul’s Drag Race All-Stars contestant Kennedy Davenport for refusing to pull out of a performance in support of the boycott.

“We must stand together to ensure that political attacks on our communities are denounced. We must work in unison to curtail monetary support of anti-LGBTQIA+ movements,” the group said in a statement. “Every time we spend our hard earned dollars at Pegasus Nightclub, we are paying to support our oppression.”

After news broke last week that real estate mogul Stephen Ross, the billionaire behind Equinox and Soul Cycle, was hosting a high dollar fundraiser for Trump. LGBTQ people quickly started cancelling their memberships and picketing outside of the fitness chains’ locations as the companies tried to distance themselves from the controversy.

The group also chastised Davenport for her “controversial performance at Pegasus and defiant refusal to support the boycott.” The bar’s Facebook page advertised a performance by Davenport late last month. A request for comment from Davenport was not returned by publication.

“We understand there are many artists who rely on the entertainment industry as their source of income,” the group said. “We are fully aware of the limits systemic oppression can impose on us to secure employment and meet our needs. We recognize that our spaces are the safest for LGBTQIA+ talent to work.”

“However, the LGBTQIA+ entertainment industry provides different platforms that reach large audiences. We ask that you use those platforms responsibly and refrain from contracting talent to attend or perform at Pegasus Nightclub.”

LGBTQ civil rights are not listed on Garza’s campaign website as one of his “key issues.”

On Fri, Aug. 9, @Mauro4Texas announced his @GOP run for @USCongress #TX20. His club, The Pegasus, books drag performers from around the nation, we are calling for a nationwide boycott in an effort to defund his contributions to anti-LGBTQIA+ politicians/platforms. #ProtestThePeg pic.twitter.com/hEoUG0ctmE

I announced my candidacy to run for #Congress to represent US Congressional District 20 in #Texas today.