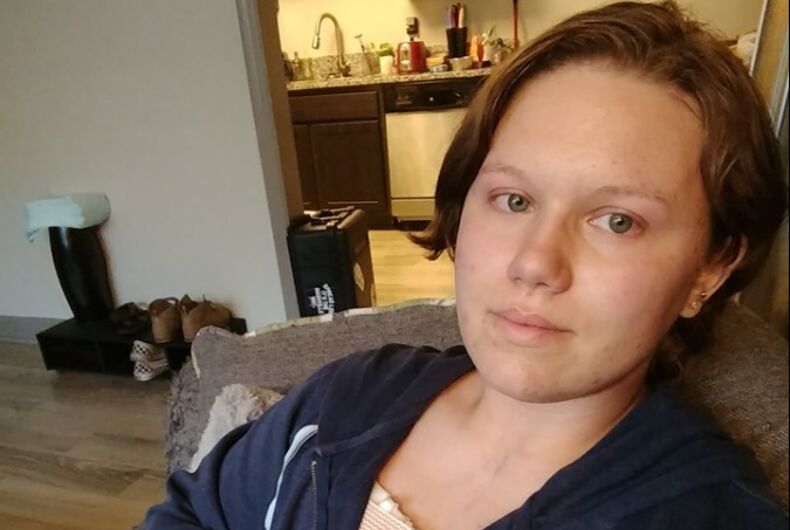 A college in Tennessee kicked a transgender student out just after he had top surgery, leaving him homeless while he was still in pain from his recovery.

Yanna Awtrey was studying biology and theology at Welch College in Gallatin, Tennessee, which is associated with the evangelical Free Will Baptists. His parents are Free Will Baptist missionaries and currently live in Bulgaria.

Awtrey, 21, said that he has had suicidal thoughts related to gender disphoria since he was 11. He started hormone therapy in January, which was a “spark of hope and happiness.”

“My gender dysphoria would put me in undesirable and even potentially harmful situations such as social avoidance almost to the point of agoraphobia – I had even, on multiple occasions, taken a dull knife to my chest at the height of my gender dysphoria,” he posted on Facebook.

Earlier this month, he got top surgery. When he woke up he was so happy that he cried so loud that “my nurse told me to be quieter for the other patients’ sake.”

Related: Trans student comes out to frat brothers. ‘I thought people would hate me.’

That’s when the day took a turn for the worse, becoming “best and worst day of my life.” An older couple, family friends, was supposed to pick him up from the hospital and let him stay with them while he recovered from the surgery.

But when they found out why he had surgery, he was no longer welcome in their home.

“She was angry and told me she wouldn’t have me in the house anymore,” Awtrey told NBC.

He went home with an acquaintance and was hoping to go back to the dorm to recover. But the family friend called Awtrey’s parents in Bulgaria and a few hours later Awtrey got an email from Jon Forlines, the Vice President for Student Services at Welch College.

“Please be aware that because of the choices you have made we will not be able to allow you to come back to the dorm,” the email said.

With his parents out of the country and estranged, no access to the dorms, and the family friends refusing to let him in, he was effectively homeless. He also can’t work for two months in order to properly recover from the surgery.

“We’re praying for you that the love of Christ will speak to your every need in the coming days,” Forlines wrote in the email.

At a later hearing with the school’s disciplinary committee, the school found that Awtrey violated their rules against “sexual perversion.”

The college confirmed to the Huffington Post that Awtrey was booted from the dorms because “attempting to alter one’s bodily identity constitutes a rejection of God’s design for humanity.”

Matt Pinson, president of Welch College, said that the school didn’t respond “inappropriately or unlovingly to the student’s situation.”

“We at Welch love Yanna and have shown [him] that love in a way that accords with our deeply held religious beliefs,” he said, misgendering Awtrey.

The college paid for a week’s hotel and food for Awtrey. After that, a friend agreed to take him in while he looks for a job.

“The physical pain right now is nothing compared to witnessing a lack of empathy for our fellow man,” Awtrey wrote on Facebook. “I don’t understand other people’s cruelty.”

He attended the school because his parents wanted him to have a connection to his faith, and he says that he still identifies as Christian.

But he sees a difference between Christianity and way many Christians live their lives.

“It’s unfortunate that the worst people I’ve ever met are the people who claim to be Christians,” he said. “It’s something I’ve had to work through… to look toward God instead of toward people.”