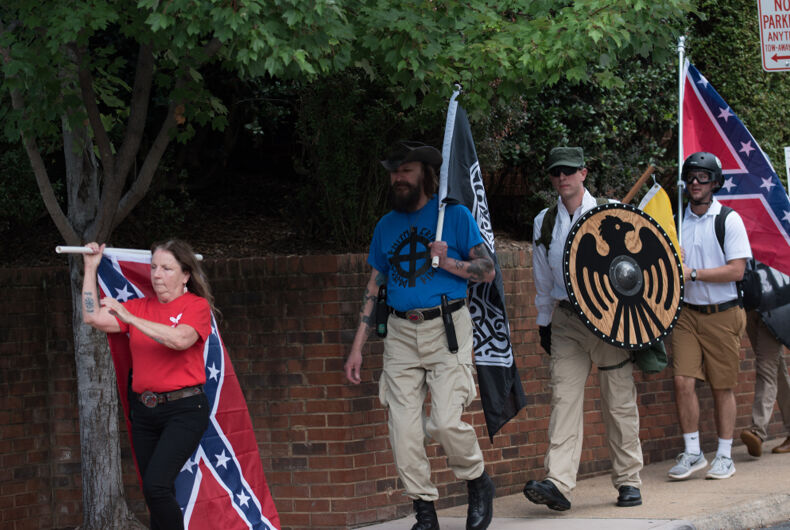 Tony Perkins, the head of the Family Research Council (FRC), has emailed his group’s followers to demand that white supremacist and anti-Semitic groups get tax-exempt status with the federal government. Perkins’ group, while masquerading as a mainstream Christian charity, has been deemed an anti-LGBTQ hate group.

Following hearings in the House Ways & Means Committee, Perkins railed against a hearing to investigate why hate groups were given not-for-profit status by the federal government and what to do about it. Perkins whined that the Democrats were trying to “use the IRS to do their dirty work.”

Related: Tony Perkins longs for the days when he could have LGBTQ people jailed

Describing the various groups highlighted during the meetings – including groups like the Vdare Foundation and The New Century Foundation – Perkins called them “mainstream Christian organizations.”

“This is exactly what conservatives warned about after Obergefell. Before the Supreme Court forced same-sex marriage on the country, President Obama’s solicitor general admitted that faith-based organizations would be the single most vulnerable group in America,” Perkins wrote.

“Now, Democrats want to weaponize the IRS against Christian nonprofits and others with whom they disagree. But don’t think for a second that they’ll stop with a list of 60. If they succeed in making the Bible ‘hate speech,’ they’ll march on to America’s churches — and then to anyone with politically incorrect views.”

The New Century Foundation runs the white supremacist magazine American Renaissance, a vicious publication that makes claims like “when blacks are left entirely to their own devices, Western civilization – any kind of civilization – disappears.”

VDare Foundation argues that “diversity per se is not a strength, but a vulnerability. It is a luxury that we can only afford as long as we preserve our breadwinner, the white American people.”

The American Family Association (AFA), another faux-Christian ministry group, was also highlighted during the meeting. Both FRC and AFA regularly refer to biblical passages that call for the execution of gay people and have long argued that homosexuality should be illegal.

Enforcement of legal requirement governing tax-free status has always been notoriously lax under both Democrat and Republican administrations.