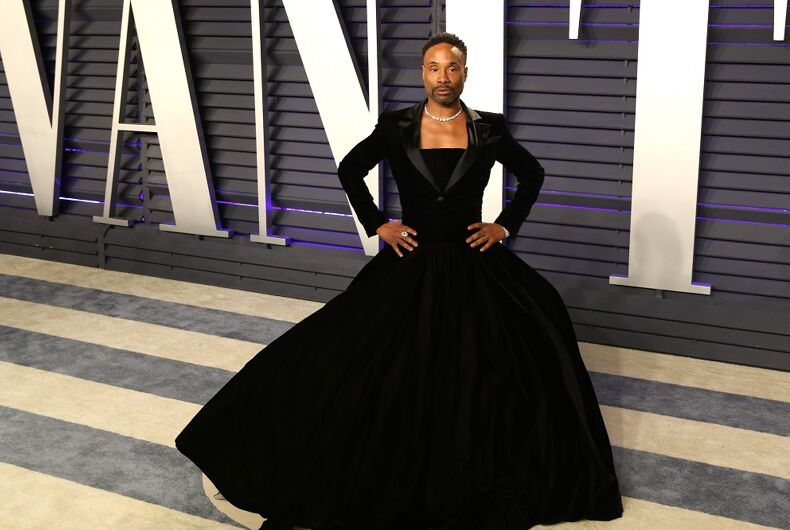 Billy Porter at the 2019 Vanity Fair Oscar Party at The Wallis Annenberg Center for the Performing Arts on February 24, 2019 in Beverly Hills.Photo: Shutterstock

Billy Porter became the first black gay man to win an acting Emmy last night for his role in Pose, and that was just one of many notable LGBTQ moments from the awards ceremony.

Porter, who plays the role of Pray Tell in Pose, won the Emmy for Lead Actor in a Drama Series. In his acceptance speech, he quoted James Baldwin.

Related: LGBTQ stories won big at the Oscars last night & we looked good on the red carpet too

The category is love y’all, love! I am so overwhelmed and I am so overjoyed that I have lived long enough to see this day.

James Baldwin said: “It took many years of vomiting up all the filth that I had been taught about myself and halfway believed, before I could walk around this earth like I had the right to be here.” I have the right, you have the right, we all have the right.

He was asked how his win helps LGBTQ people after the ceremony. He responded: “I know that being black and gay and out and being in this position and speaking in the position that I get to speak from is the change.”

“I hope that young queer people of all colors can look at me and know that they can,” he added, holding back tears.

Billy Porter has an emotional moment backstage after his #Emmys win, "I hope that young, queer people of all colors can look at me and know that they can." https://t.co/G6ooSCPL2j pic.twitter.com/0u3HW65fd3

Patricia Arquette took home the Emmy for Supporting Actress in a Limited Series or Movie for her role in The Act.

In her speech, she talked about her famous transgender sister Alexis Arquette, who passed away in 2016, and spoke out against transphobia.

In my heart I’m so sad. I lost my sister Alexis. Trans people are still being persecuted.

I’m in mourning every day of my life, Alexis, and I will be, the rest of my life, for you, until we change the world until trans people are not persecuted.

"I'm in mourning every day of my life." #TheAct's Patricia Arquette (@PattyArquette) talks about the passing of her sister Alexis Arquette and the persecution of trans people during her acceptance speech for lead actress in a limited series https://t.co/WmT1Fmyol4 #Emmys pic.twitter.com/E1iMULV5QV

Laverne Cox reaction to Patricia Arquette's #Emmys speech, where she said: "I'm so sad I lost my sister Alexis and that trans people are still being persecuted… Let's get rid of this bias that we have everywhere" #Emmys2019 pic.twitter.com/XX3wwmjuyR

RuPaul’s Drag Race won the Emmy for Competition Program. This is the third year that the show has been nominated in the category and the second that it has won the category.

During his speech, RuPaul told people to register to vote.

"Speaking of voting and love, go and register to vote." #DragRace's @RuPaul urges the public to register to vote while accepting the award for best competition series https://t.co/WmT1Fmyol4 #Emmys pic.twitter.com/Z2qthMvs20

But the image of Ru on stage… surrounded by white men… drew some attention. After the ceremony, RuPaul was asked about why the production team behind RPDR isn’t all that diverse.

RuPaul, after making a tired joke about the “BLT community,” he had a rambling non-response.

First of all, most of our show is black, gay, and drag queens. So check, check, and check.

But, no, we’re pretty diverse. There are lots of different types of people here.

Is it important? Absolutely. Hey, you know, I grew up- I had to fight- I feel like I’m about to quote a movie right now.

In the press room at the @TheEmmys, I asked @RuPaul to address the diversity or lack thereof in his show @RuPaulsDragRace. And… pic.twitter.com/kL1EYxJQXK

Laverne Cox attended the ceremony and she used the platform to bring attention to two LGBTQ Supreme Court cases by bringing along ACLU attorney Chase Strangio.