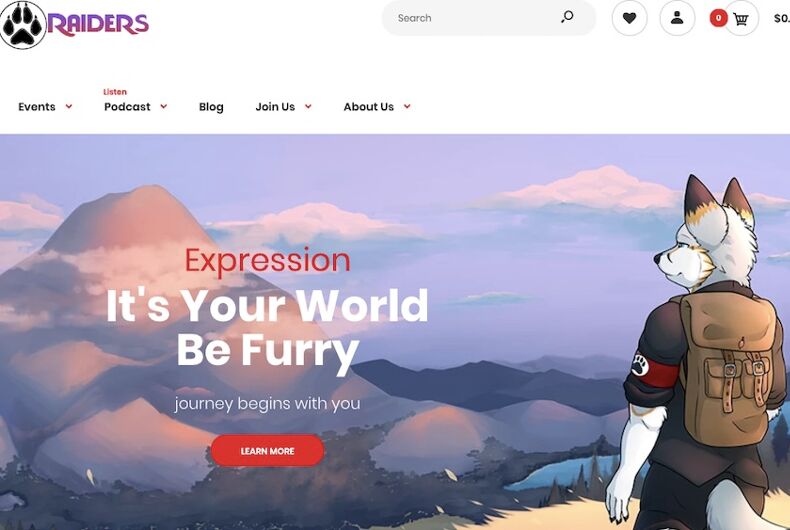 Editor’s Note: This commentary was written by Patch O’Furr, publisher of furry news site Dogpatch Press. He is using a nom de plume because it is part of his “fursona” (his identity within the community, somewhat akin to a drag name) and because he has been targeted for doxing and harassment in the past by alt-right members of the furry community.

Like a dog chasing a car, Milo Yiannopoulos is chasing relevance again. He’s found a new target for trolling: the furry community.

Furries are generally known as people who dress in mascot-like animal costumes. But there’s so much more to these fans for talking animals: They create media, from comics to science-fiction and animated films. They’re fiercely devoted to their colorful subculture that shares some of the spirit of punk (with extra hugs). They don’t have hugs for a hateful bigot like Milo, though.

Related: Milo signed up for a furry convention, but furries aren’t having it

Desperate to capitalize on whatever attention he can grab after being banned from many platforms, there’s not much for the far-right grifter to squeeze from the dregs of his former audience. So why not play them against furries? After all, furries already have many queer people making a space of their own within a marginalized interest. And maybe a lightbulb went on in Milo’s head when he saw the fox in Zootopia say, “It’s called a hustle, sweetheart.”

This week, Milo targeted Chicago Midwest Furfest. The December convention is one of the furry community’s leading lights, with a herd of 10,000 goers (and most of them don’t want bigotry to stink up the place). Soon after he registered, online protesting swamped the convention volunteers. In short order, a rejection letter won cheers from everyone who objects to the harm he does (like harassing trans people).

He vowed to crash the party anyways. To do so will involve complicity from a few sympathizers among the “alt-furries,” a small fringe with grudges against (pick any): the SJWs, feminists, communists and anyone progressive, with a bagel on top.

There’s no wasting time for a grift, so Milo‘s already pitching the alt-furries with tacky framed photos to fund his trip, up-selling them at $250 a pop. It’d be too predictable to see him keep the money and bail out of attending the convention altogether.

If he goes, however, trolling the Midwest Furfest won’t be like teasing a harmless kitten.

This is the convention that suffered a chlorine gas attack in 2014. It sickened 19 people, made national news and hardened organizers for future incident responses. The FBI investigated an alt-furry suspect with a history of trolling who was never charged: He’s known as “the Confederate fursuiter,” and in 2017 he showed up to the convention with a Trump sign, got arrested and was marched out naked.

The 2017 incident was more-or-less a lone wolf, but let’s look at the fringe of Milo‘s sympathizers in the furry community.

How big is the far-right in gay/queer furry spaces?

LGBTQ people make up a big part of the furry community A survey by the formal research group FurScience found roughly close amounts of gay, bi, and straight members in furry fandom from from convention samples of up to 1,400 critters. Roughly 2/3 are cis men, but there’s many more transgender people among furries than you might meet in the general public.

Because of the full-body costumes, or fursonas, that furries use to express themselves, it’s an interesting community where you can’t assume anything about anyone.

Furries gather around gentle tolerance for their own weirdness. Its public activities have drawn tabloid media attention from the outside, and grown a deep-rooted suspicion of sensationalism from within. The sensationalist media depiction also contributes to reluctance to de-platform high-profile bad actors working inside the furry community.

Nevertheless, heart-felt opposition to haters has grown, corralling the alt-furries with bad reputations and getting them blocked from group activities.

Alt-furries (aka. Nazifurs) are negligible in size. Collectively, they form a few overlapping/mutually-bickering groups of a few hundred each. They become a problem when they seek infamy and troll to control spaces. Such trolling ruined Denver’s Rocky Mountain Fur Con after they gamed the room reservations and caused months of conflict that raised the event’s security cost.

Nazifurs then tried (and failed) to launch a fraud scheme against a convention that followed, using stolen credit cards to make fraudulent hotel bookings with the intention of cancelling at the last minute, leaving many unpaid rooms and basically sinking the convention financially.

In 2018, the Denfur convention was the target of the scheme by “Foxler,” a Nazifur group founder. When he showed up, he was vigorously escorted off the premises. A few months later, furries earned the ultimate seal of approval from an elder subculture. Jello Biafra (former lead singer of the punk band, The Dead Kennedys), who wrote “Nazi Punks F*ck Off” in 1981, was DJ for the Frolic furry dance party at the well-known San Francisco leather bar, The Eagle. During his set, he agreed to go on video saying “Nazifurs f*ck off!”

That’s a message seen on popular ribbons at conventions, and it’s the best sign of how the furry community feels about alt-furries in general.

Nazifurs don’t f*ck off without ongoing effort, though.

Even while Foxler is in Denver court right now on a child sex offense charge, his group is scheming together with Milo to foist video propaganda on the fandom. It’s part of a grudge-holding vision of making their own far-right furry convention, a sort of ethnostate inside the fandom where they’ve never been able to seize things from the ones they target.

That makes it smart for people inside and outside of the furry community to stay alert. If you smell Milo coming in a newly minted fursona — maybe a snake, a weasel, or a wolf in sheep’s clothing — remember what furries have been through. From chlorine attacks to schemes to ruin our spaces, it’s not just jokes or bad opinions — it’s a threat we all need to unmask.