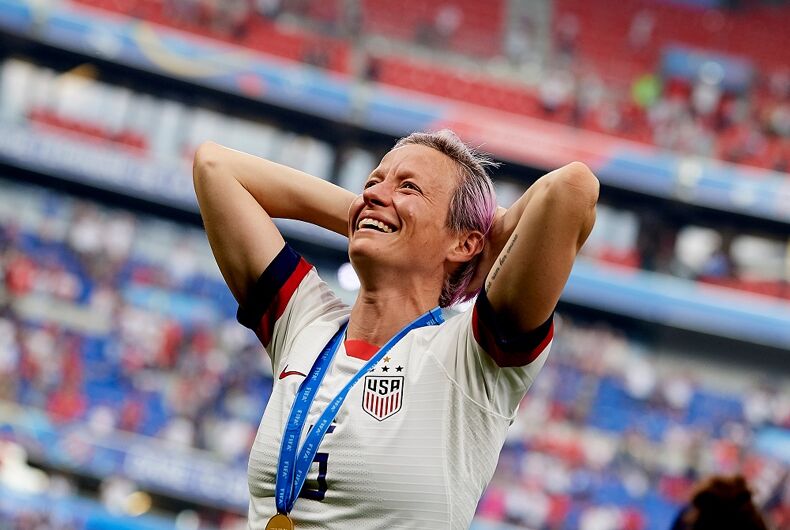 Over the past year, soccer star Megan Rapinoe has led U.S. Soccer Women’s National Team to victory at the Women’s World Cup, was named Sports Illustrated Sportsperson of the Year, and inspired a nation with her irreverence toward Donald Trump.

But years before that happened, she outed her twin sister to her parents to take the heat off of herself when she came out.

Rachael Rapinoe, Megan’s fraternal twin sister, appeared in an episode of Cyd Zeigler’s podcast Five Rings To Rule Them All. The sisters talked about growing up in a rural and religious part of California.

Rachael started college at the University of Portland a year before Megan did because the latter was competing with the U.S. team at the under-19 World Cup, and she started a relationship with another woman.

“At that time, I had no idea that I was attracted to women,” Rachael said. “But I knew that I had always felt different and I knew that Meg probably felt the same way.”

Rachael said that she dated this woman for about a year but that they didn’t call each other “girlfriends.”

“We were just best friends, right? But we slept together every night.”

Megan joined her at college, and Rachael broke up with her “best friend” late in the year. Rachael was heart-broken and came out to her twin sister, who came out to her as well.

But since things weren’t going well for Rachael, their mother came up from California to visit.

“I was heartbroken,” Rachael recounted. “I was going through my first real break-up, and so my mom came up to Portland because she knew something was going on.”

And that’s when she was outed to her mother by her own twin sister.

“I was at class, and her and Megan got to talking, and Megan came out to her.”

“She didn’t take it very well. She was upset, and Meg’s second reaction after coming out was, ‘Well, Rachael’s gay too.’ And that’s basically how I came out, which was fine.”

“I didn’t care because I probably wouldn’t have said anything for a very long time, so I should thank Megan for blasting me like that.”

Rachael was a soccer player herself, playing for her university’s team and then for Stjarnan Women in Iceland and the U.S. under-23 team. She was named West Coast Conference Co-Player of the Week in 2007 while playing for the University of Portland.

Since college, she has co-hosted a soccer camp with her famous sister.