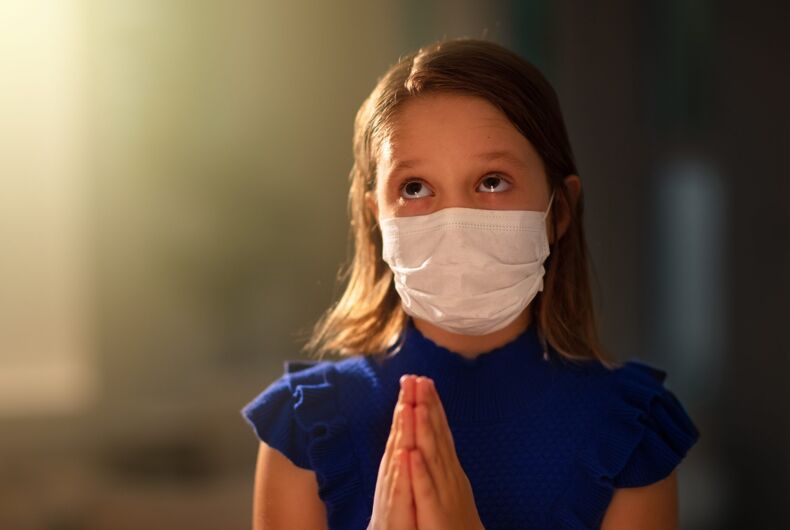 The anti-LGBTQ hate group Liberty Counsel, one of the groups that serve as the legal defense arm of the religious right, is helping to lead the push to reopen churches during the coronavirus pandemic.

The effort by evangelicals endangers the lives of parishioners and community members who would come in contact with the potentially infected churchgoers who had gathered in large groups.

The group is calling for churches to “ReOpen” on Sunday, May 3 following several instances of far-right ministers refusing to shut down services as part of measures banning large gatherings in a desperate attempt to prevent the spread of COVID-19.

A Christian evangelist who mocked the response to the novel coronavirus pandemic has died after likely being infected while preaching on the streets of New Orleans. A Virginia minister who defied lockdown orders and vowed to keep preaching until he was arrested or died, saying he was protected by God, died less than a week later from COVID-19.

Louisiana Pastor Tony Spell has been in national headlines for weeks because of his refusal to follow his state’s ban on large gatherings. He was arrested in late March, and, still defiant, he bused parishioners in for a church service.

Now a member of his church has died of COVID-19 and his lawyer has been hospitalized due to complications from the disease.

Spell was arrested again this week after attempting to hit a protestor with a bus he was driving.

Liberty Counsel is defending a Tampa, Florida minister who was arrested for defying lockdown orders.

“The lockdowns have closed churches at a time of greatest need, and they must reopen to meet the burgeoning needs of the community,” Mat Staver, the group’s founder and chairman, said in a press release. “Churches are now more essential than ever to bring comfort, hope, and help to the people they serve. Each church is different and each one must assess when and how best to reopen.”

Experts have said reopening churches to large gatherings could potentially spread the virus to so many people it would overwhelm the medical system. The coronavirus is highly contagious and easily spread from person to person.

Liberty Counsel is one of the most vicious anti-LGBTQ legal organizations in the U.S.

The group’s president announced she would take her gun to Target to shoot transgender people after the store announced their dressing and restrooms were trans-friendly. Other staff members have claimed that “the life of the average homosexual is controlled by lust” and that AIDS proves “God’s love for gays.“

How Australia fell in love with Priscilla, Queen of the Desert