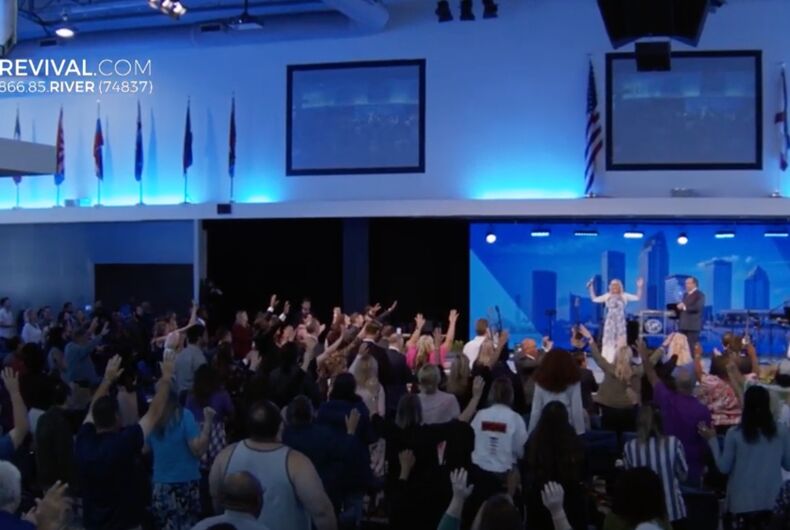 The anti-LGBTQ hate group Liberty Counsel has announced they will represent Florida pastor Rodney Howard-Browne after he was arrested for refusing to abide by a government order limiting public gatherings. The group serves as the legal arm of the religious right movement.

The organization also represented disgraced Kentucky former county clerk Kim Davis who was jailed for refusing to follow a judge’s order to issue marriage licenses after same-sex marriage was legalized. They are also arguing cases before the Supreme Court to allow discrimination against LGBTQ people.

“Not only did the church comply with the administrative order regarding six-foot distancing, it went above and beyond any other business to ensure the health and safety of the people. Contrary to [Hillsborough County] Sheriff [Chad] Chronister’s allegation that Pastor Howard-Browne was ‘reckless,’ the actions of Hillsborough Country and the Hernando County Sheriff are discriminatory against religion and church gatherings,” Liberty Counsel Founder and Chairman Mat Staver said.

The eccentric pastor has already made several wild claims about his power over coronavirus as he defied social distancing requirements. He has claimed the church installed 13 machines to shoot down sneezes to keep the sanctuary sterile and promised his followers that if they trust in God, they will never run out of toilet paper.

The group describes the set-up as “a hospital grade purification system.” The manufacturer’s website is vague and unprofessional – including pdf files instead of webpages.

“I’d remind the good pastor of Mark 12:31, which said there’s no more important commandment than to love thy neighbor as thyself,” state attorney Andrew Warren said at a news conference announcing the pastor would be arrested. “Loving your neighbors is protecting them, not jeopardizing their health by exposing them to this deadly virus.”

Sheriff Chronister added, “Our goal here is not to stop anyone from worshiping, but the safety and well-being of our community must always come first.”

The emergency order restricts all “public or private gatherings, including community, civic, public leisure, faith-based events, sporting events, concerts, and any similar events that bring together more than 10 people in a single room, single space, or any venue, at the same time.”

Liberty Counsel is listed as an “extremist group” by the Southern Poverty Law Center’s watchdog list of hate groups for “advocating for anti-LGBTQ discrimination under the guise of religious liberty.” The group’s former Director of Cultural Affairs, Matt Barber, once tweeted that AIDS a metaphor of “God’s love for gays” with a photo of a young man on his deathbed.

A transgender woman was bludgeoned to death with rocks, but no one knows who she is