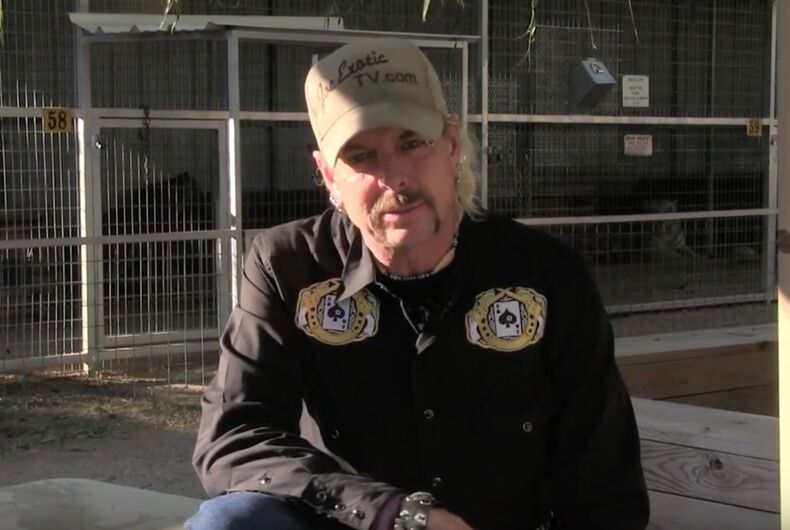 Joe Exotic, the subject of the hit Netflix documentary series Tiger King: Murder, Mayhem and Madness, has filed a $94 million lawsuit from jail, alleging he was targeted by law enforcement because he is gay.

Exotic, whose real name is Joseph Maldonado-Passage, is serving a 22-year sentence for hiring someone to kill his arch-rival, animal sanctuary owner Carole Baskin. He was also convicted of killing adult tigers to make room in his petting zoo for more cubs.

Exotic, a gay polyamorous meth user who ran for both president of the U.S. and governor of Oklahoma, was notorious for his internet videos that regularly targeted “that bi**h Carole Baskin” for abuse. The phrase has exploded in popularity on social media.

The former zookeeper’s complaint alleges authorities placed “a generic species” on the Endangered Species List and not a specific breed of tiger solely so they could arrest him to promote their “animal rights agenda.” He says he was targeted “because [he] is an openly gay male with the largest collection of generic tigers and crossbreeds.”

His lawsuit seeks $15 million for false imprisonment and selective enforcement plus an additional $75 million for loss of property and research. He also seeks restitution for the cost of boarding all of his big cats while he has been in jail.

Exotic says he “humanely euthanized” the five adult tigers he was convicted of illegally killing.

He was convicted in 2019 for paying a hit man $3,000 to murder Baskin. The two had a longstanding feud going back years and Exotic regularly trolled Baskin online and threatened her life.

Baskin’s millionaire husband mysteriously disappeared years ago, and Exotic regularly claimed she had killed him, ground up his body and fed it to her big cats. The kooky keeper even created a music video to detail the allegations and goad Baskin to respond.