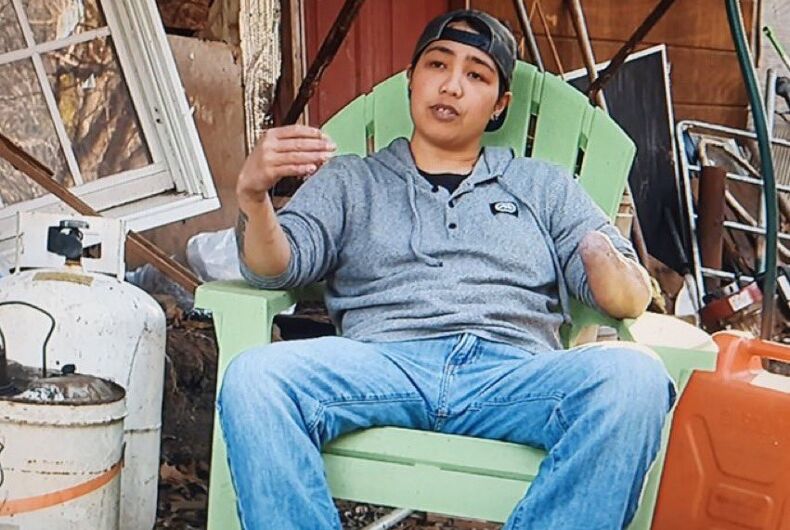 LGBTQ people are binge-watching Tiger King, the series focusing on a gay polyamorous meth user who owned an exotic animal petting zoo and ran for president, but they likely don’t realize one segment of our community has been erased.

Saff, one of the show’s only sympathetic characters, is presented as a lesbian and repeatedly misgendered on camera. On the Trans Day of Visibility, it’s worth pointing out that he is actually a transgender man.

Related: Dems tell lawmaker to quit re-election bid amid reports he had sex with a 17-year-old boy

While the series focuses on Joe Exotic, the crazed exotic cat “zookeeper” with an obsessive grudge against the shady owner of a rival “animal sanctuary,” Saff’s backstory is just as dramatic and shocking.

One of the zoo’s longest and most dedicated employees, Saff had his arm amputated after a tiger attacked him. Within a few days, he was back at work. Footage taken at the time shows Exotic worrying about the zoo’s customers and his personal finances more than Saff’s health.

Robert Moor, who produced a podcast about the sordid story before Netflix’s documentary, pointed out on Twitter that the show pretty much erased Saff’s gender identity.

“A useful piece of info for anyone discussing the show: Saff, the person who got mauled by the tiger, told me repeatedly that he is trans, prefers to be called Saff (not ‘Kelci’), and uses he/him pronouns. So please do likewise,” Moor tweeted.

He added, “It’s tricky, because all of the news broadcasts at the time, and most of the people at the zoo, use the wrong pronouns for Saff. (Joe was particularly bad about this.)”

8. (Not really “trivia,” but a useful piece of info for anyone discussing the show): Saff, the person who got mauled by the tiger, told me repeatedly that he is trans, prefers to be called Saff (not “Kelci”), and uses he/him pronouns. So please do likewise. pic.twitter.com/hCE9vS55Dh

While Netflix collaborated with GLAAD recently on the #FirstTimeISawMe campaign to raise transgender visibility in the entertainment industry, one of their most popular recent offerings practically erases Saff as a transgender man and presents him as a lesbian without any context.

In 2018, of the 38 transgender characters on TV, 31 were played by trans actors, according to the LGBTQ media watchdog group GLAAD.

“Entertainment and media [are] the most powerful vehicle to share our stories — to combat negative or dehumanizing headlines, create a culture shift that makes it safe for LGBTQ people to live authentically as ourselves, and to offer hope and inspiration to young queer and trans people around the world,” GLAAD Executive Director Sarah Kate Ellis said at the time.