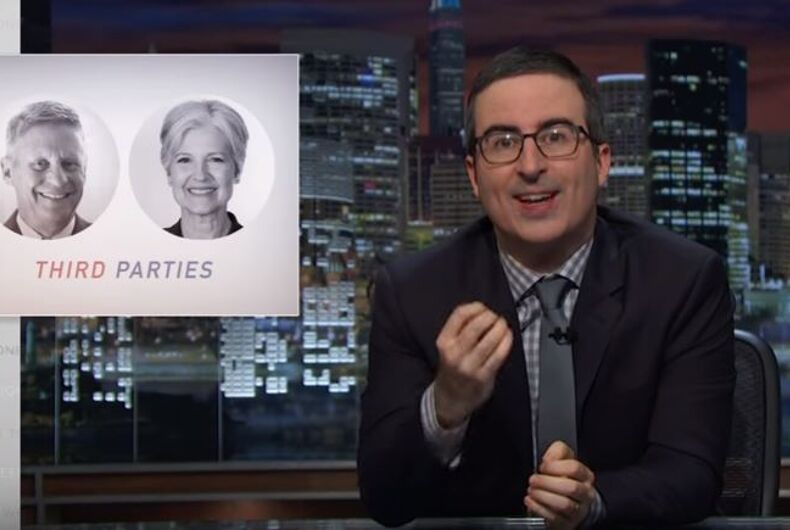 John Oliver explains why there is no third party solution. Photo: YouTube

Donald Trump and Hillary Clinton are the two most disliked presidential candidates in history. Sadly, there is no third party solution, as John Oliver explains in a segment from last night’s episode of “Last Week Tonight.”

After taking a moment to look at some of the lesser known presidential hopefuls, like Independent write-in candidate Joe Exotic, a gay man who is the director of a private zoo for tigers and proudly professes his refusal to cut his hair or wear a suit, Oliver turns his attention to two third party candidates you may have actually heard of: Libertarian Gary Johnson and Green Party nominee Jill Stein.

As Oliver points out, in a recent New York Times poll, over a third of young voters said they are considering voting for one of them. So they deserve a closer look, but once you zoom in it isn’t as pretty as many of their would be supporters probably believe.

John Oliver’s examination of the two includes pointing out their eccentricities, from Gary Johnson’s weird sexualizing of mountain climbing to Jill Stein’s past work with a band he describes as sounding like “the Indigo Girls fronting the Red Hot Chili Peppers.”

But more importantly, Oliver shows that one of the reasons they have become as popular as they have is likely due to the fact that most people don’t know what they actually believe, which in both cases is pretty far outside of mainstream political opinion in this country.

Stein does not seem to understand what quantitative easing is, or at the very least is not prepared to explain it, despite the fact that she says she could use it to cancel student debt. This in spite of the fact that the president cannot do that, as only the Federal Reserve has that ability.

Then there is her tendency to pander to the anti-vaccine and 9-11 truther communities.

Johnson, who famously didn’t know what Aleppo was, couldn’t name a single world leader he admires, and couldn’t name the leader of North Korea, can however quickly and easily name government agencies he would like to get rid of: starting with the Departments of Education, Commerce, and Housing and Urban Development.

“Whoa there! He is giving up government agencies left and right! This is Sophie’s Choice if she hated both of her children,” Oliver jokes.

Oliver also rolls tape of Johnson calling for an end to income tax and corporate tax, and for abolishing the IRS. He would replace the lost revenue, he claims, with one federal consumption tax. Which, it should be noted, would have to be set higher than where he places it unless you are willing to face serious government cuts. Not that Johnson is particularly willing to admit that fact.

Johnson also wants to do away with the minimum wage, one of many reasons Bernie Sanders has been pointing his supporters away from Johnson and toward Hillary Clinton.

In the end, it is clear that while a vote for someone, anyone other than Clinton or Trump might feel good in theory, the deeper you dig, the more you see that you don’t have the choice of the lesser of two evils, but rather the lesser of four, as Oliver puts it.

“Anyone who goes into a voting booth November the 8th and comes out saying, ‘I feel 100 percent great about what I just did in there,’ is either lying to themselves or did something unspeakable in that booth,” Oliver says.

“Everyone has to own the flaws of whoever you vote for,” he concludes. “Whether they are a lying, handsy, narcissistic sociopath; a hawkish, Wall Street friendly embodiment of everything that some people can’t stand about politics; an ill-tempered mountain molester with a radical, dangerous tax plan that even he can’t defend; or a conspiracy pandering political neophyte with no clear understanding of how government operates…”

Watch the hilarious and depressing video below, then take a shot and get ready to vote for your particular brand of lesser evil on Nov. 8.