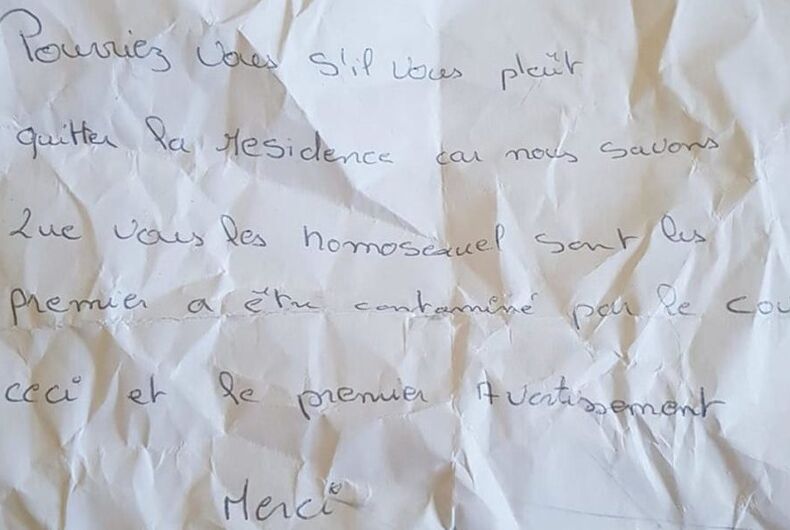 The note left on the windshield of David's partner's carPhoto: via TETU

A gay couple was told to leave their apartment because “you homosexuals are the first to be contaminated by COVID-19.”

The handwritten, error-laden note was left on the car of an Uber Eats driver in Marseille, France this past Thursday, March 26. He went down to his car to go to work when he found a note on his windshield.

Shocked, the man brought it to his apartment to show it with his partner David, 33, who works as a nursing assistant.

“Could you please leave the building because we know that you homosexuals are the first to be contaminated by the COVID-19,” the note reads. “This is the first notice. Thank you.”

No name was left on the note and they don’t believe that it was from their landlord. The building has a private parking lot with a fence and a gate, which makes them think that it was one of their neighbors who left the note.

Both men said that they were mad and they went to the police, but they were told that the police can’t do anything because it’s “a warning, not a threat.”

“It hurts me for two reasons,” David told Têtu, “because I’m a nursing assistant and I’m gay. I can understand that, psychologically, it must be hard to be locked in at home. I think that this person ‘cracked’ a little, and stupidity comes out.”

He thinks that maybe it’s a neighbor of his who has already filed complaints against other people in the building, including a Muslim family for playing “Middle Eastern music.”

“I think that this is a person who is completely lacking in intelligence and education,” he said about the person who wrote the note, whoever it was. “I certainly think that this person is religious and that they truly believe what they’re saying.”

“To write something so stupid, you’d have to believe it.”

David posted about it on Facebook and he was later contacted by the LGBT liaison of the Bordeaux Police, who told him to file a “pre-complaint” online.

“He said that they were going to make sure that there’s a response, that they could maybe test it for DNA or analyze the handwriting.”

But he said that he’s not reassured. His partner, he said, isn’t worried, but he is asking  himself “what it will be the next time.”

“Will they destroy my car? Will they be waiting for me outside?”