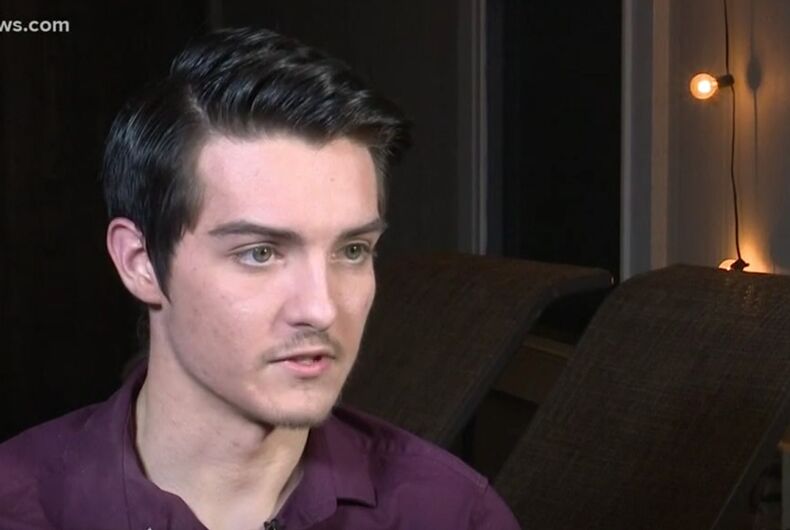 A homophobic landlord in Florida was caught on video kicking a gay tenant out of his apartment.

Randall Coffman lives in an apartment attached to the home of Jackie Cooper in Clay County, just outside of Jacksonville.

This past Saturday, she told him he had to leave in ten days because she doesn’t “want homosexuals coming in and out of my place.”

In a video Coffman recorded on his phone, Cooper can be heard admonishing Coffman for not coming out to her earlier.

“You didn’t tell me you’re gay until yesterday,” she said.

Related: A lesbian who was brutally harassed in her home just won a landmark court case

On December 1, Coffman moved into the apartment, which has its own entrance but shares a driveway with Cooper’s home.

Two weeks later, she told him not to have girls over late, and he told that that wouldn’t happen because he’s gay. And that’s when the harassment started.

The next day, she went to kick him out, and Coffman recorded the conversation on his phone where she said that her problem with him is that he’s gay.

“If I was straight I think me and her would get along great,” said Coffman.

Cooper said that she wasn’t kicking him out because she’s homophobic, but because he wouldn’t provide her with a copy of his driver’s license and because his friends left cars on her driveway for days. Coffman said that’s not true.

Even though he caught her on video in an act of discrimination, he probably will not have any legal redress. Clay County does not ban housing discrimination against LGBTQ people.

While Cooper may be in the wrong because she is supposed to give a tenant 15-days notice before kicking them out instead of the 10-day notice she gave Coffman, he’s already looking for a new place to stay.

He also told First Coast News that he’s uncomfortable returning to the apartment.

A lesbian couple’s pride flag was stolen. Their neighbor’s response was incredible.