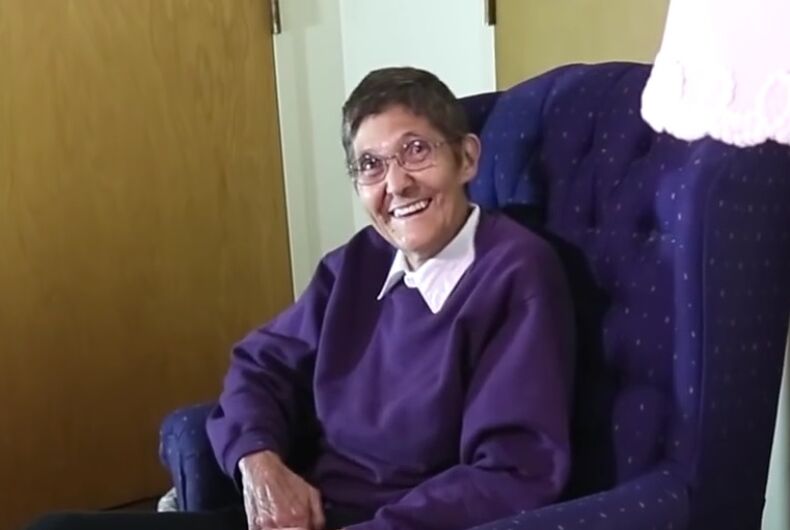 A woman in Illinois who allegedly faced severe harassment and violence in her home because she’s a lesbian won a landmark court victory.

Marsha Wetzel sued the retirement home she lived in for 15 months, the Glen St. Andrew Living Community (GSALC), for failing to do anything about the harassment.

The trial court dismissed her claim, saying that a landlord can’t be held responsible for other residents’ behavior, only their intentional discrimination.

The U.S. Court of Appeals for the Seventh Circuit overturned that ruling, saying that the Fair Housing Act bars landlords from “purposefully failing to protect” a tenant from “harassment, discrimination and violence.”

The case now goes back to the trial court.

“This is a tremendous victory for Marsha,” said Karen Loewy of Lambda Legal, which represents Marsha. “She, just like all people living in rental housing, whether LGBT or not, should be assured that they will at least be safe from discriminatory harassment in their own homes. What happened to Marsha was illegal and unconscionable, and the court has now put all landlords on notice that they have an obligation to take action to stop known harassment.”

Marsha lived for 30 years with her partner Judy Kahn, and they raised a son together. They never married since marriage equality was only recognized in Illinois in 2013, the same month that Judy died.

When Judy died, her family took possession of the home they shared, shunned Marsha, and kicked her out. A social worker found her a room at GSALC.

Marsha said that she talked about Judy and their son with staff before she moved in and that there were no problems. The harassment started after she began living there in 2015.

According to the complaint, she was talking about her family with other tenants when they learned that she is a lesbian. This bothered one in particular, Robert Herr. He started calling her names like “fucking dyke,” “fucking faggot,” and “homosexual bitch.”

Marsha uses a scooter to get around, and Herr pushed her off in the lobby, leaving a bruise on her arm. The staff at GSALC did nothing about it.

The administration labeled Marsha a “troublemaker” and a “liar,” and said that they wouldn’t believe anything she told them.

Another resident told her “you look like a man,” and “homosexuals will burn in hell.” She spit on Marsha. Again, the administration did nothing.

In early 2016, she was attacked in the mailroom by someone who hit her head and called her a “homo.” She didn’t seek medical attention because she thought that no one would believe her.

She changed her schedule so that she wouldn’t run into people in the common areas, getting food from the dining room as it was closing. Herr continued to harass her and said that her son was “a homosexual-raised faggot son.”

Several residents reported her smoking in her room, even though she said she always smoked outside. She got a warning anyway, and later Herr blocked her from going to the place where she’s supposed to smoke and said he would “to rip [her] tits off” and she was reported.

The administration still did nothing, saying that “Bob will be Bob,” referring to Herr.

GSALC characterized the harassment as “no more than ordinary ‘squabbles’ and ‘bickering’ between ‘irascible,’ ‘crotchety senior resident[s],” but the court ruled, “the harassment Wetzel describes plausibly can be viewed as both severe and pervasive.”

“I look out the window, I’ve got a cemetery out there,” she said in a video. “That’s when I’ll stop being made fun of because I’m gay.”

This senior came out at graduation & it was a showstopper