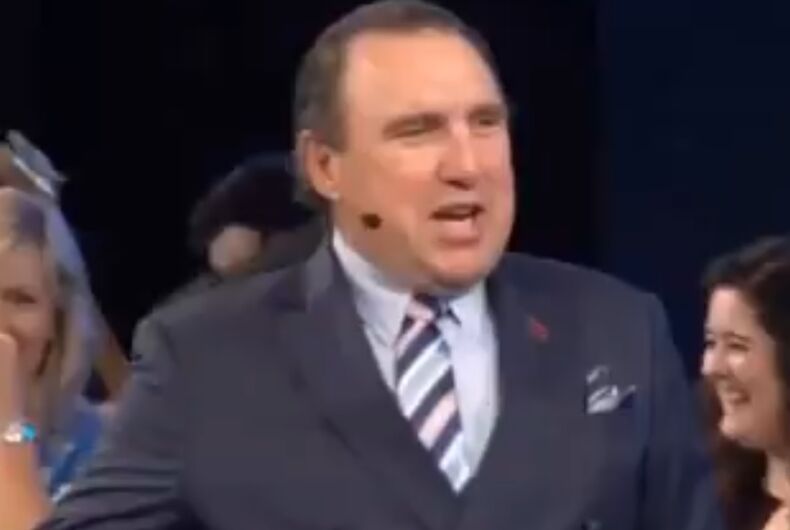 An evangelical pastor who “laid hands” on and prayed over Donald Trump in 2017 said that only “pansies” would avoid shaking hands during the coronavirus pandemic.

Rodney Howard-Browne, pastor of The River at Tampa Bay church in Florida, was caught on video telling members of his church to shake hands with several people around them, admonishing those who were afraid by indirectly calling them pansies.

Howard-Browne, who is originally from South Africa, told his flock that public health officials “don’t want us to do this, but just turn around and greet two, three people.”

He said that no one should be afraid of all that contact during a global pandemic because the church “has to be the safest place.”

“If you cannot be saved in church, you in serious trouble,” he joked. He assured his followers that his church would only close “when the Rapture is taking place.”

“This Bible school is open because we’re raising up revivalists, not pansies.”

Right-wing pastor Rodney Howard-Browne is not about to cancel church or prevent congregants from shaking hands because they are not a bunch of "pansies." pic.twitter.com/C36kBIEWqF

Howard-Browne is a charismatic evangelist and his services are known for “uncontrollable ‘holy laughter,’ shaking with mirth, dancing in the aisles or falling to the ground,” as well as speaking in tongues and the laying of hands. His church has an estimated 1200 to 1300 members.

In 2017, he appeared in a photo of evangelical leaders who laid hands on Trump while he prayed in the Oval Office. He prayed for God’s “supernatural wisdom, guidance, and protection” for Trump.

When the photo was later released, Howard-Browne said, “There is a planned attack on our president and that’s all I can tell you about right now; I know what I’m talking about, I’ve spoken to high-ranking people in the government.”

He has since been a zealous supporter of Trump. In 2019, he posted a video to social media where he said that he stands “100 percent with the president of the United States” and that Trump isn’t mean enough to people.

“I’m very proud of the president and as far as I am concerned — well, some said he’s really mean and he shouldn’t say these things — he needs to get meaner,” the Christian pastor said.

Last week, televangelist Jonathan Shuttlesworth made fun of Italian churches that were taking measures to prevent the spread of coronavirus, calling them “sissies,” “pansies, no balls, got neutered” because they were “telling everybody to use Purell.”

After Biden sweep, it’s time for Sanders to exit the race. America needs a leader to rally around.