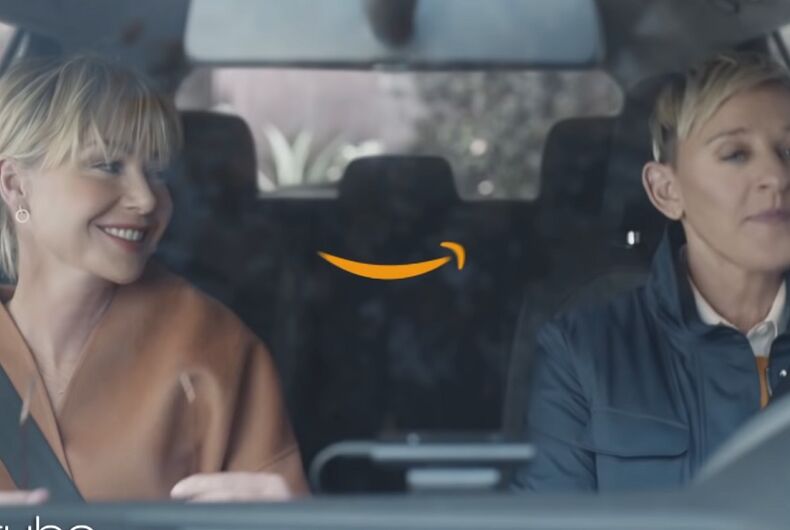 Ellen and Portia in the Super Bowl ad for Amazon AlexaPhoto: Screenshot/EllenTube

The Super Bowl, American football’s championships and one of the entertainment industry’s largest annual events, begins tomorrow evening. Super Bowl LIV (54) is between the NFL’s Kansas City Chiefs and San Francisco 49ers, and is being held at Hard Rock Stadium in Miami, Florida. The game starts at 6:30PM, and will air worldwide – on FOX Sports and Westwood One Radio in the United States, and Jennifer Lopez and Shakira headline the halftime show.

There will be plenty of LGBTQ representation before, during, and after tomorrow’s festivities. Several commercials will feature out celebrities, and there will even be an out participant in the game.

Related: NFL player Aaron Hernandez came out to his mother as gay before his suicide

Katie Sowers, an out assistant coach for the 49ers, will be the first LGBTQ person and the first woman coach to take part in the Super Bowl. An ad Sowers filmed with Microsoft about her upbringing and embrace of football will air during the game’s broadcast – where the reported price tag for ad space is over US$5 million, and sold out three months in advance. If her team wins, she will be the first known LGBTQ person to earn a Super Bowl championship.

You can see the ad below, and also read about Sowers being turned down from coaching at an Indiana college due to her sexuality here.

To kick off the game’s festivities, out entertainer Demi Lovato will sing the Star-Spangled Banner, a coveted role during the Super Bowl experience that other entertainers such as Whitney Houston, Cher, Beyoncé, Idina Menzel and Lady Gaga (the latter of whom is out) have performed as well. Lovato has been out since 2017. She’s also very experienced, having sung the national anthem at sporting events several times. Here’s her performing the song during the 2015 World Series:

During the game breaks, you can see several LGBTQ people performing in at least 8 inclusive commercials. Bisexual comedian and talk-show host Lilly Singh will star in an Olay ad featuring several women, including Busy Philipps and Katie Couric.

Kim Chi and Miz Cracker, two drag queens and alumni of the competition series RuPaul’s Drag Race, will star in a commercial for Sabra Hummus. While only a teaser has been released so far, conservative Christians are already outraged and have organized yet another petition effort.

Here’s the teaser below:

While some mistakenly believed that this would be the first time drag queens would be represented during the Super Bowl broadcast, RuPaul reminded everyone that he starred in an ad for WebEx.com in 2000.

My Super Bowl commercial from 2000.

Out comedian and TV host Ellen DeGeneres will also be in a spot for Amazon during the game, alongside wife Portia de Rossi. Here’s a teaser for that:

TurboTax has produced a spot that features trans actresses Trace Lysette and Isis King, performing a song entitled “All People Are Tax People.”

Another ad will be by Kellogg’s, and Queer Eye‘s Jonathan Van Ness will be included in the commercial in promotion of Pop-Tart Pretzels.

Out rapper Lil’ Nas X, known for his hit “Old Town Road”, will go toe-to-toe with actor Sam Elliott in commercials for Doritos centered on their Cool Ranch bags of chip.

Budweiser will also include footage of LGBTQ women during its ad spot, specifically members of the U.S. Women’s National Team like Megan Rapinoe, and married couple Ali Krieger and Ashlyn Harris.

After the game ends, Fox will air the third season premiere of the reality competition series The Masked Singer, hosted by Nick Cannon. While no LGBTQ participants have been confirmed yet, why not remain optimistic that there will be one? Also, there will be a giant banana, so there’s that.

Will endorsements from LGBTQ celebrities really sway any voters?