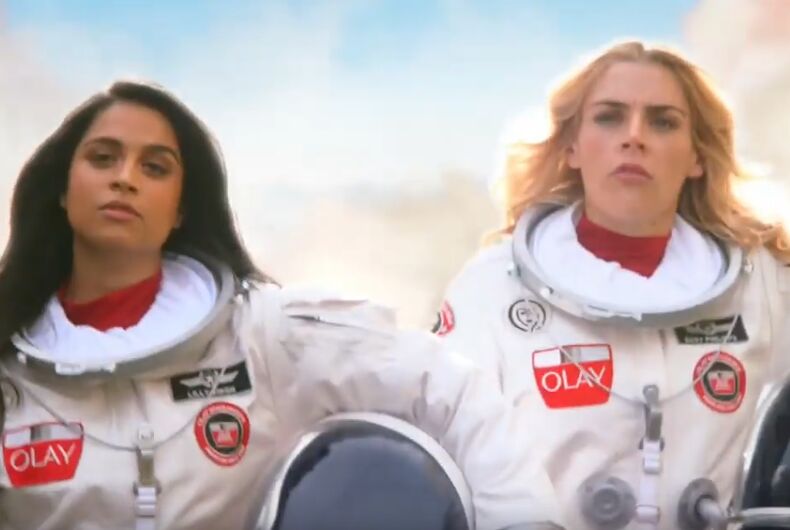 Out talk show host Lilly Singh will appear in a Super Bowl ad this weekend for Olay.

Singh is bi and is the host of A Little Late with Lilly Singh on NBC. She doesn’t shy away from talking about her sexuality on her show, and now she has made it to the “Oscars of commercials.”

A space-themed ad will promote Olay’s #MakeSpaceForWomen campaign. Olay will donate $1 every time someone uses the hashtag on Twitter to Girls Who Code, an organization that helps women in computer science, up to $500,000.

In the teaser for the ad, Singh is an astronaut along with actress Busy Phillips and retired astronaut Nicole Stott.

Phillips asks “Who has the keys?” and Singh replies, “I don’t know, I thought you did!”

Journalist Katie Couric also appears in the teaser as a journalist.

“The Super Bowl is literally the Oscars of commercials,” actress Taraji P. Henson, who runs mission control in the ad, told Adweek during the three-day ad shoot. “I feel like I made it!”

The woman-centered ad will provide some contrast with other Super Bowl ads. According to Adweek, women only appear in a lead role in 27% of Super Bowl ads, even though they make up almost half of the people expected to watch the game.

Olay is owned by the corporation Procter & Gamble, which has a long history of LGBTQ-positive ads.