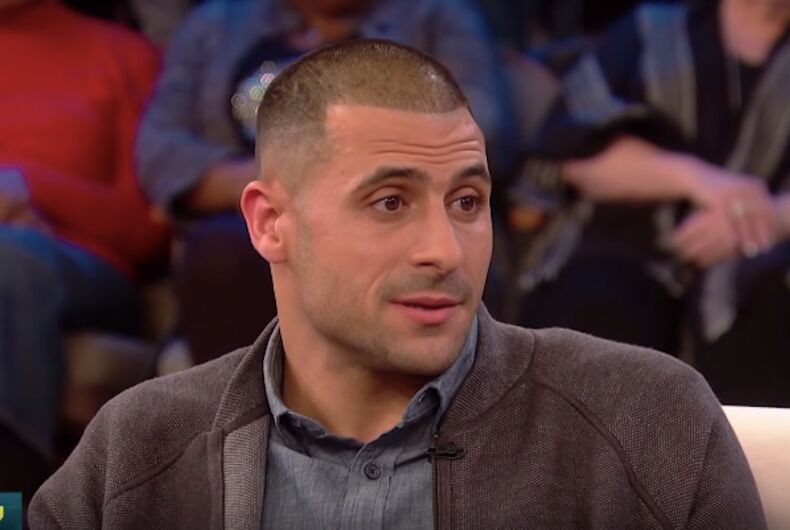 Jonathan Hernandez, the older brother of convicted murderer and former NFL player Aaron Hernandez, said that Aaron came out as gay to their mother shortly before his suicide in prison on April 19, 2017. Aaron died by hanging himself with his prison bedsheets.

Jonathan told talk show host Dr. Oz this week that Aaron came out to his mom during her 2017 visit to the Souza-Baranowski Correctional Center in Lancaster, Massachusetts, where Aaron was incarcerated for the first-degree murder of his friend, semi-pro football player Odin Lloyd.

Related: Why did Aaron Hernandez write John 3:16 on his face before committing suicide?

In 2013, Aaron, a former tight end for the Patriots, was arrested in connection with the murder of Lloyd, his fiancee’s sister’s boyfriend. He was convicted in 2015 and sentenced to life in prison.

Jonathan was on Dr. Oz’s talk show to discuss the January 2020 Netflix docuseries Killer Inside: The Mind of Aaron Hernandez.  He said:

[Aaron was] like, “Mom, you’re going to die never knowing your son.” … They started bickering back and forth, and all of a sudden they have this conversation, and they’re both flooded with tears across from each other, and here the weight of what’s on my brother is being expressed. And for a mother to be looking at it across from the scratched glass in the zone, seeing your son who you would have never anticipated being in this situation… sharing this news.

Jonathan says that Aaron’s internalized homophobia was exacerbated by his being abused by an older neighborhood boy at a young age and living in a homophobic culture. Jonathan added that he had no idea his brother was gay and is unsure whether his sexuality played any role in Lloyd’s murder.

Multiple law enforcement officials said the ex-NFL player’s desire to keep his bisexuality a secret could have been a motive in his murder of Lloyd, fearing that Lloyd might out him to others.

Aaron’s ex-fiancee Shayanna Jenkins-Hernandez said Hernandez denied the rumors of his being gay during a conversation she had with him about his sexuality. She said, “I saw no indication that he was gay or homosexual. I wish I had known how he felt, just so we could have talked about it. I wouldn’t have disowned him. I would have been supportive. I can’t fault him if he was feeling that way.”

Alyssa Anderson, his college girlfriend, also said that she thought Hernandez was bi or gay when she caught him texting other men.

Aaron’s lawyer Jose Baez wrote in his August 2018 book, Unnecessary Roughness, that Aaron admitted having an affair with a man just days before his suicide. Aaron’s other lawyer, George Leontire, also said that he knew his client was gay.

“Aaron and I talked about his sexuality,” Leontire said. “This man clearly was gay, acknowledged it. Acknowledged the immense pain that it caused him. I think that he also came out of a culture that was so negative about gay people that he exhibited some self-hatred.”

After his suicide, prison guards found notes that Hernandez left behind for his fiancee, his daughter, and a close prison friend named Kyle Kennedy who law enforcement sources described as his prison boyfriend.