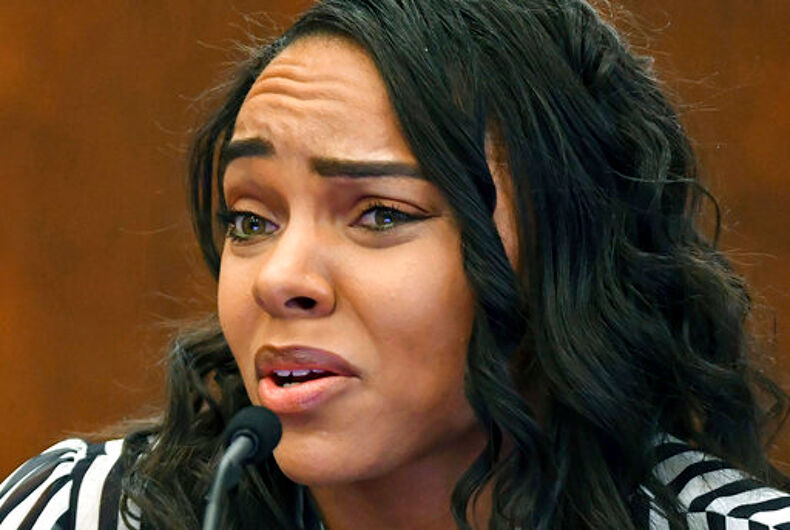 FILE - In this March 30, 2017, file photo, Shayanna Jenkins-Hernandez, fiancee of former New England Patriots player Aaron Hernandez, testifies in Suffolk Superior Court during his trial for the July 2012 killings of Daniel de Abreu and Safiro Furtado in Boston. Hernandez hanged himself in his prison cell on April 19, days after he was acquitted of the double murder. He was still serving a life sentence for the 2013 killing of Odin Lloyd. Photo: (Josh Reynolds/The Boston Globe via AP, Pool, File)

Former NFL player Aaron Hernandez said rumors that he was gay or bisexual were not true, his former fiancee said in an interview on the “Dr. Phil” show that aired Tuesday.

Shayanna Jenkins-Hernandez made the remark during the second part of a two-part interview with host Dr. Phillip McGraw. The first part aired on Monday.

Jenkins-Hernandez said in the part of the interview that aired Monday that she doesn’t think the former New England Patriots tight end killed himself last month, as authorities have said. She said he was upbeat in their last telephone conversation before he was found hanged and that there was no indication he was suicidal.

She said in the Tuesday segment that there was a suicide note for her and one for their daughter, but there was no note addressed to Hernandez’s fellow prisoner Kyle Kennedy.

Jenkins-Hernandez also said she doesn’t believe Hernandez and Kennedy were lovers or even close friends. Hernandez didn’t talk about him, she said.

A lawyer for Kennedy has said Kennedy was “stunned and saddened” by Hernandez’s death and that the two had requested to be cellmates last year but the request was denied. He said Kennedy considered Hernandez a close friend.

The death of Hernandez, who grew up in Bristol, Connecticut, and played football at the University of Florida, came days after he was acquitted in a 2012 Boston double slaying.

He already was in prison, serving a life sentence in the 2013 killing of Odin Lloyd, the boyfriend of Jenkins-Hernandez’s sister. A judge recently erased the murder conviction because Hernandez died before a ruling was issued on his appeal.

Jenkins-Hernandez said she was thrilled when the conviction was voided.

“That’s how it should have always been,” she said.

Why Rosie won’t be playing Steve Bannon on SNL