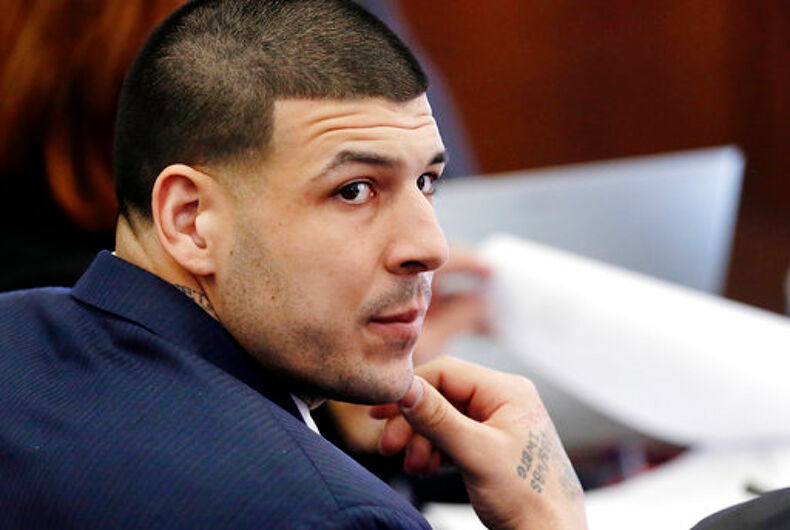 When pro-football player and convicted murderer Aaron Hernandez died by suicide last year, rumors about his bisexuality were already being discussed in the media.

Now his lawyer says that he came out just before his death.

In 2013, the tight end for the Patriots was arrested in connection with the murder of Odin Lloyd, his fiancee’s sister’s boyfriend. He was convicted in 2015 and sentenced to life in prison.

According to a Newsweek report from last year, Lloyd called Hernandez what he interpreted to be an anti-gay slur, and Hernandez feared Lloyd would out him as bisexual.

He was also charged in a separate double homicide case, but was acquitted in 2017 of those charges. Just after that acquittal, The Kirk & Callahan Show discussed rumors of his bisexuality and even joked about his sexuality, calling him a “tight end on and off the field” who “then he became a wide receiver.”

Several days later, he was found dead in his prison cell. His death was ruled a suicide.

Hernandez’s lawyer Jose Baez has a new book this week, Unnecessary Roughness, in which he says that Hernandez opened up about his affair with a man just days before he killed himself.

Baez said that he was discussing the prosecution’s strategy to turn his fiancee Shayanna Jenkins against him by questioning her about his affairs with a man and with a woman on the witness stand, when Hernandez broke down crying out of fear that Jenkins would find out about his relationship with a man.

“But Jose, she’ll be devastated,” Hernandez said, according to Baez. “I never meant to hurt her. I know I keep disappointing her. But she is my soul. She is all I have and will ever have.”

Baez said that Hernandez seemed “hopeful” after their conversation, and the next day he sought out Jenkins to tell her about the affairs so that she wouldn’t be blind-sided.

“While the news about the woman did not shake her, I could see the betrayal in her face when I mentioned the man,” wrote Baez.

“She knew him and had spent time with him and Aaron. She felt like a fool.”

Baez did not give the man’s name, writing that he does not want to out someone who is presumably still alive.

Jenkins, the fiancee, wrote the forward for Unnecessary Roughness. She wrote that she had no idea Hernandez was “gay or homosexual.”

“There has been much speculation about Aaron’s sexuality since his death. I can say this: Aaron was very much a man to me. I saw no indication that he was gay or homosexual. I wish I had known how he felt, just so we could have talked about it. I wouldn’t have disowned him. I would have been supportive. I can’t fault him if he was feeling that way.”

In an interview for the documentary Aaron Hernandez Uncovered, George Leontire, another of Hernandez’s lawyers, said that he knew his client was gay.

“Aaron and I talked about his sexuality,” Leontire said. “This man clearly was gay, acknowledged it. Acknowledged the immense pain that it caused him.”

“I think that he also came out of a culture that was so negative about gay people that he exhibited some self-hatred.”

Alyssa Anderson, his college girlfriend, also said in the documentary that she thought Hernandez was bi or gay when she caught him texting other men.

“Back in college, there were text messages I saw on his phone when he came back from a trip [which were] from a male,” she said. “[They] didn’t have a name, didn’t really say too much, but it was a relationship with somebody and I questioned it.”

The Christian right is worried that the gays are ruining the musical ‘Oklahoma!’