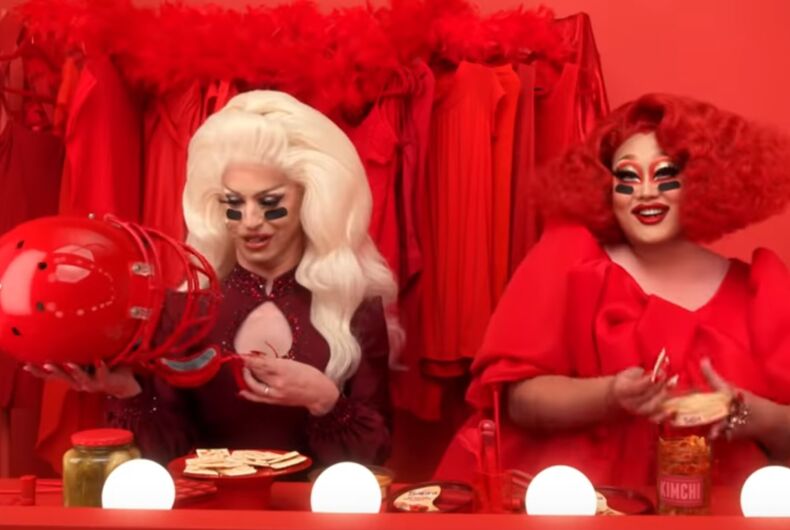 Conservative Christian groups are calling out the NFL because of an ad starring drag queens set to air during the Super Bowl this weekend.

Earlier this week, the hummus company Sabra released a teaser for an ad starring Miz Cracker and Kim Chi, two drag queens who have competed on RuPaul’s Drag Race. The ad will air on Fox during the Super Bowl.

The teaser is cute and innocuous, which shouldn’t take away from the historic moment: it’s the first time drag queens will appear in an ad during the Super Bowl, one of the biggest television events of the year that regularly gets over 100 million viewers.

[Update: Actually, it’s not the first Super Bowl ad to feature drag queens. There was an ad with RuPaul that aired in the year 2000. We regret the error.]

One Million Moms (OMM) – a project of the American Family Association, an SPLC-designated hate group – is up in arms over the ad. It has one member – the group’s “president.”

“Sabra Dipping Company LLC is choosing to push an agenda of sexual confusion instead of promoting its actual product,” the OMM alert reads. “The PC-inclusive ad blurs the biological distinctions between male and female.”

“Normalizing this lifestyle is contrary to what conservative, Christian parents are teaching their children about God’s design for sexuality.”

“Thanks Sabra! Now parents have to explain to their confused children!” the alert continues. The alert does not describe what parents will need to explain about performers eating hummus on TV or why it’s bad for parents to talk to their children.

They claim over 16,000 people have signed the petition so far.

Another conservative Christian organization – the American Society for the Defense of Tradition, Family, and Property – sent out an email blast decrying the commercial and saying that Sabra is trying to “normalize ‘transgenderism.'”

“All of this comes after major pushes to promote Drag Queen events to ‘groom’ the youth at public libraries,” the email reads.

The email claims the organization started a petition to tell “the Super Bowl to stop promoting drag queens,” but it could not be located on TFP’s website.