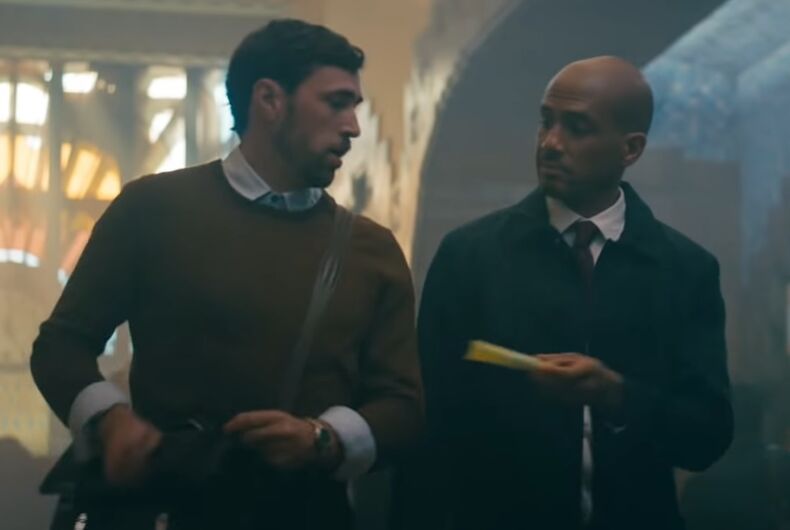 One man hands another a tampon in the Thinx ad.Photo: Screenshot/YouTube

The perpetually enraged One Million Moms (OMM) has started a petition in protest of a commercial about men menstruating.

The company Thinx makes underwear for menstrual hygiene. They released an ad that asks what the world would be like if cisgender men had periods too, about how that would normalize it as a topic of discussion.

It’s a pretty innocuous ad that says, “If we all had them, maybe we’d be more comfortable with them.”

But not to the folks at OMM – a project of the American Family Association – who called it “twisted,” “crass,” and “damaging to young people who are already navigating the uncertainties of puberty amidst the constant push of liberal agendas.”

“Society does not need Thinx to normalize periods between genders by airing a commercial with such crudeness and sensationalism,” OMM said on its website.

But then OMM gets to the point: “Women and men are different. Men do not menstruate… ever. Period.”

That is the point of the Thinx ad: some people don’t menstruate and we’re not used to hearing them talk about periods.

OMM may have thought that the ad is a reference to transgender men and non-binary people who menstruate because the topic that was in the news earlier this week when the brand Always announced that it will be removing the female symbol from the packaging of its sanitary pads.

Their site has a petition asking Thinx to remove the ad that it claims over 8000 people have signed.

“Women, who are your target market, and even men are offended by your newest MENstruation campaign,” the petition reads. “Your MENstruation commercial is crude and crass! Not only do you blur gender lines, you totally destroy them.”

Thinx has hired gender non-conforming models for their products in the past.