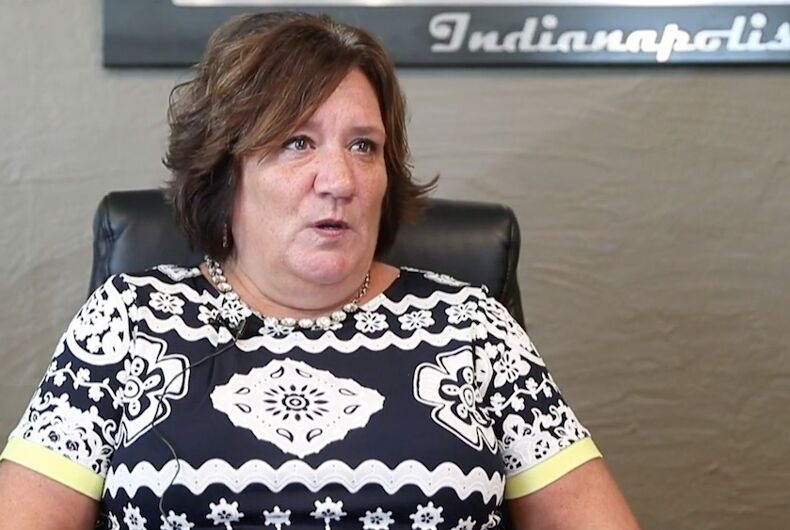 Kelley Fisher, who is straight, says the Catholic Archdiocese of Indianapolis helped remove her from her job as a social worker at Roncalli High School over her public support of Shelly Fitzgerald and Lynn Starkey, two Roncalli guidance counselors who were fired earlier this year for having same-sex marriages.

Fisher, who had worked at Roncalli for the last 15 years, has since filed two discrimination complaints with the Equal Employment Opportunity Commission (EEOC). Fitzgerald and Starkey are also suing the school and the Archdiocese of Indianapolis, which oversees the area’s Catholic schools.

The Indy Star reports, Fisher officially worked for Catholic Charities, “part of the archdiocese contracted by schools to place social workers in them.” Fisher alleges that Archbishop Charles Thompson told her that publicly supporting Fitzgerald or Starkey would go against the Catholic Church.

After making her posts, Roncalli principal Chuck Weisenbach called Fisher in to ask whether she could “adhere to Catholic teachings when giving advice to LGBTQ students.” Fisher replied that she felt very strongly about never applying her own personal values or judgement when counseling students.

Four months later, Fisher was placed on a “performance improvement plan” despite having only ever received positive performance reviews. She was told she had been “adversarial” to the school and disruptive by posting statements that could get her called as a witness in Fitzgerald and Starkey’s lawsuits.

In April, Fisher was told she wouldn’t be returning to Roncalli. Fisher then sent an email to coworkers saying that she’d been removed from the school over to her support of Fitzgerald and Starkey. In May, Catholic Charities fired her for the email.

The Indy Star has since interviewed three of Fisher’s coworkers who say they worry about supporting Fisher, accepting friends’ invitations to go to gay bars or appearing in photos of friends’ same-sex weddings for fear of termination. The Archdiocese says teachers have nothing to worry about but adds it “has a constitutional right to ‘hire leaders who support the schools’ religious mission.'”

Earlier this year, the archdiocese told all 70 local schools under its jurisdiction to fire LGBTQ-identified staff or else risk losing church support and non-profit status.

In 180 days, the EEOC will let Fisher know of their assessment on whether the school or archdiocese violated her rights. If the EEOC tells Fisher she has the right to sue, Fisher will have 90 days to file a lawsuit.