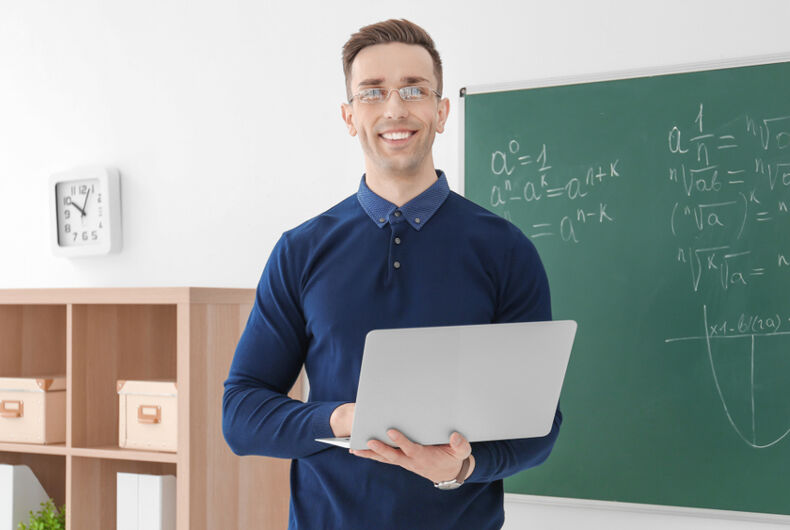 Yesterday, the Trump administration’s Department of Justice (DOJ) filed a “Statement of Interest” letter to a court supporting the Archdiocese of Indiana’s firing of a gay teacher from a Catholic school in July 2019.

While the letter isn’t surprising considering the administration’s support of anti-LGBTQ discrimination under the banner of so-called “religious freedom,” many U.S. Catholic schools are taxpayer-funded, essentially meaning that the U.S. government supports using our money to fund schools and other religious entities that oppress us.

Related: Archbishop punishes Catholic school for not firing a gay teacher, but administrators won’t back down

When Cathedral High School discovered that guidance counselor Joshua Payne-Elliott was married to his husband, Layton Payne-Elliott, the local Archdiocese directed the school to fire him, and Payne-Elliott subsequently sued the Archdiocese “alleging it illegally interfered with his contractual and employment relationship,” according to the IndyStar.

However, in the DOJ’s letter to the court, Eric Dreiband, Assistant Attorney General for the DOJ’s Civil Rights Division, writes, “The First Amendment to the United States Constitution protects the right of religious institutions and people to decide what their beliefs are, to teach their faith, and to associate with others who share their faith. The First Amendment rightly protects the free exercise of religion.”

U.S. Attorney Josh Minkler adds, “If the First Amendment’s Religion Clauses stand for anything, it is that secular courts cannot entangle themselves in questions of religious law,” adds .

“The First Amendment prevents courts from impairing the constitutional rights of religious institutions… [The] Supreme Court precedent clearly holds that the First Amendment protects the Archdiocese’s right to this form of expressive association, and courts cannot interfere with that right.”

While the DOJ is right that the Supreme Court has previously ruled that churches and other religious organizations can decide on their own membership, the administration thinks that right should extend to religious-owned businesses and anti-LGBTQ world governments, basically permitting LGBTQ people to be ousted entirely under the guise of religious freedom.

The letter is little more than red meat for Trump’s base of religious conservative voters and won’t likely affect the outcome of the lawsuit. But it’s all the more concerning when you realize that many Catholic schools in the U.S. receive taxpayer funds through the Trump Department of Education voucher programs.

Basically the administration is saying that it’s okay for any religious-owned entities to fire a queer person, even when the entity depends on taxpayer funds to operate.