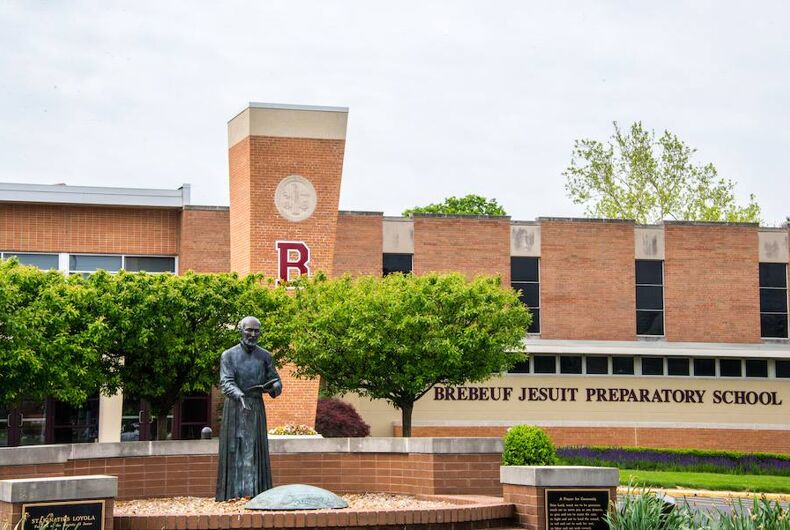 Indianapolis Archbishop Charles Thompson has dramatically overstepped his authority in the church after a long simmering fight over a gay teacher at Brebeuf Jesuit Preparatory School. The private school is known as one of the best in the state.

The Jesuit-run prep school has defied the demand, pointing out that the diocese does not have jurisdiction over the school. The Archbishop’s “direct insertion into an employment matter of a school governed by a religious order is unprecedented,” school officials said in a letter sent home to parents.

“While we’ve enjoyed a collaborative partnership with the Archdiocese for nearly 57 years, we have always maintained control of our school’s operations and governance, including our personnel decisions.”

“After long and prayerful consideration, we determined that following the Archdiocese’s directive would not only violate our informed conscience on this particular matter, but also set a concerning precedent for future interference in the school’s operations,” the school’s president and trustees wrote.

“Brebeuf Jesuit has respectfully declined the Archdiocese’s insistence and directive that we dismiss a highly capable and qualified teacher due to the teacher being a spouse within a civilly-recognized same-sex marriage,” they said in the letter.

The Indianapolis diocese has become a lightning rod for anti-LGBTQ sentiment and directives lately. Late last year, church officials inserted themselves into another hiring decision at a local Catholic high school put a counselor on paid leave after their same-sex marriage was uncovered. That school receives taxpayer money in the form of school vouchers.

She was told that she could get divorced, resign, or quietly finish the school year and then leave. She didn’t like those options, so a week later she was placed on leave. She had worked at the school for 15 years.

The Archbishop used the same line of reasoning to justify the termination of the Brebeuf teacher. Neither the teacher nor the guidance counselor taught religious classes or ministered to students, but Thompson insists that they’re “ministerial staff” and, therefore, must abide by all the diocese’s arbitrary demands.

“We will continue to offer a rigorous academic program that follows more than 450 years of Jesuit tradition and is committed to expansive and critical thinking, competent and compassionate ethical concern, creative and artistic expression, and excellence grounded in faith and the dignity of the human person,” the school shot back.

“Our identity as a Catholic Jesuit institution remains unchanged.”

We are saddened by today’s news, but we are so grateful for the ongoing support of our community. We are, and always will be, an independent, Catholic, Jesuit school. #BeBrave pic.twitter.com/xCKQKEG86u

And it must cease. Brebeuf's willingness to stand with its LGBT employees, and its unwillingness to participate in the targeting of LGBT people is a necessary and courageous stance. It has been supported by the Jesuit Provincial Superior in the Midwest.