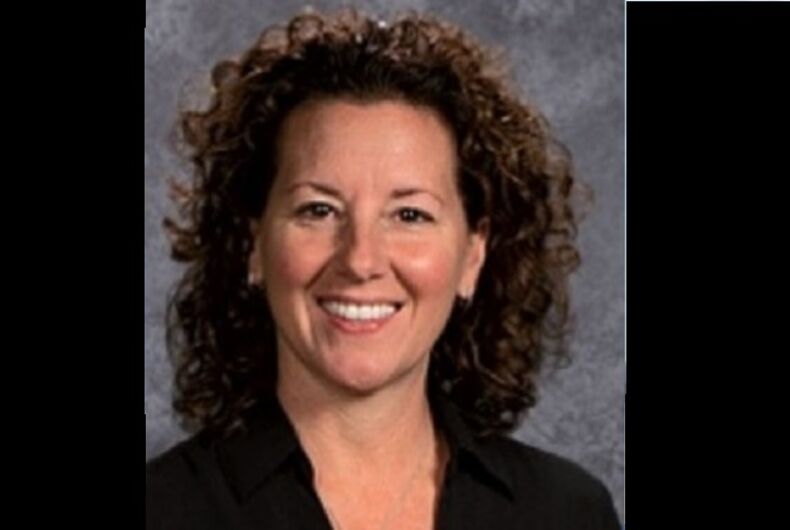 A guidance counselor at a Catholic high school in Indiana was placed on leave after administrators found out that she was married to another woman, and now community members are rallying behind her.

Shelly Fitzgerald has worked at Roncalli High School in Indianapolis for 15 years. She has also been with her wife for 22 years, and they have a child together.

This past week, though, she was placed on administrative leave.

In a message posted to Facebook that was only shared with some parents, Fitzgerald said that someone “sought out my marriage certificate from Hancock County and turned it into” the school administration, which passed it along to the Archbishop of Indianapolis.

She said that she had a meeting with the principal and an administrator, and she was given three options: resign, divorce her wife, or quietly wait until the end of the school year.

Fitzgerald wrote that she will not quit, divorce, or spend a year “not telling anyone why I have to leave the job I’ve loved so much.”

It stressed the importance of one particular teaching: “the belief that all persons are called to respect human sexuality and its expression in the Sacrament of Marriage between a man and a woman as a sign of God’s love and fidelity to His Church” and it said that the expectation is “clearly defined in school employee contracts.”

This hasn’t stopped some parents, students, and alumni from supporting the popular counselor. Junior Madison Aldrich plans to pass out 2000 rainbow heart stickers.

“I have had hundreds of students and alumni message me in ways they can support Ms. Fitzgerald,” she said.

RTV-6 reports that flowers are being placed on a bench outside the school with a sign that says “Love More” in support of Fitzgerald.

And alumni are placing their Roncalli shirts in front of the school in support of her.

Happening right now: a group of Roncalli HS alumni are taking their t-shirts and placing them in front of the school. It comes as they are trying to show support for guidance counselor Ms. Fitzgerald. @rtv6 pic.twitter.com/j7wlPJhHZi

Although Roncalli is a private school, it receives funding from Indiana’s school voucher program, which costs the state $153 million a year.

Roncalli High School received about $1.5 million from the voucher program this past school year, 50% more than the $1 million a year it gets from the Archdiocese of Indianapolis.

Fitzgerald has hired an attorney and is not commenting on the matter.