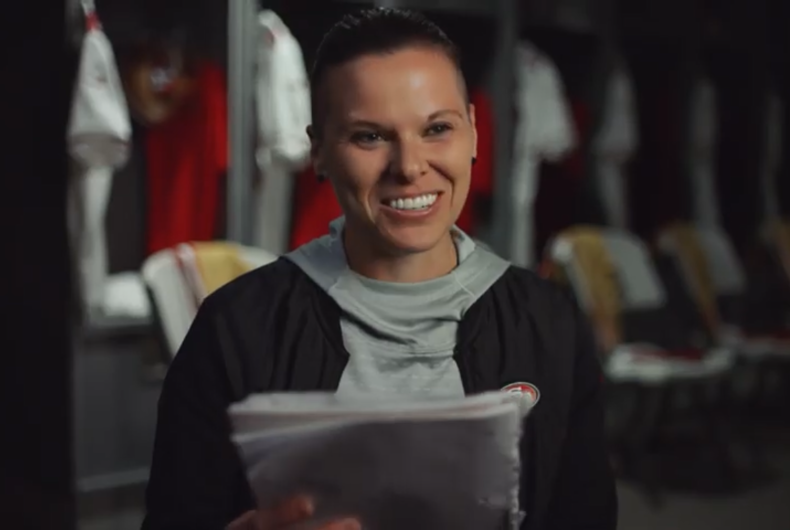 Katie Sowers in a Microsoft Surface commercial.Photo: Screenshot via YouTube

Katie Sowers is an third-year assistant offensive coach for the NFL’s San Francisco 49ers – but she’s also a lesbian woman, the first openly LGBT coach in the league’s history.

Yesterday, Sowers was coaching from the 49ers’ booth when they defeated the Minnesota Vikings by a score of 27-10 to advance to the NFC Championship Game next week. That means with one more win, Sowers could become the first out member of an NFL team participating in the Super Bowl.

Related: Tom Brady talks about accepting his son for being ‘different’ because he doesn’t like football

While Sowers was assisting Head Coach Kyle Shanahan in leading their team to victory, she was receiving recognition online and on-air. A commercial she recorded in promotion of the Microsoft Surface Pro 7 tablet aired during a break in NBC’s broadcast of the game.

She was then introduced to viewers by sideline reporter Michele Tafoya following the commercial. Tafoya also bought attention to down judge referee Sarah Thomas, the first women to ever officiate a NFL playoff game.

.@49ers Offensive Assistant @KatieSowers and Down Judge Sarah Thomas are changing the game of football.#FootballisFemale pic.twitter.com/V15MKPVI9g

The Microsoft commercial, which aired throughout other NFL playoff games and the Golden Globes as well, features Sowers reading a letter to her younger self. The ad features her saying, “I’m not here to just be the token female. I’m here to help us win,” in the midst of her coaching players through a drill.

“I would want to tell this little girl,” Sowers says after reading the letter, “to keep pushing herself. Your dream is coming.”

Sowers first came out in 2017 through an Outsports interview less than one season into working for the 49ers, in a temporary position at that time. While she risked her coaching career to come out, not only does Sowers have a full role on the staff now, but she has been repeatedly praised by some of her players – namely Quarterback Jimmy Garoppolo. “She’s been tremendous,” he said in a recent press conference. “She’s feisty, man. Katie is awesome out there. She’ll get after guys, and it’s fun to be around.”

The results of her work has reflected in the results as well. The 49ers offense put up a total of 51 touchdowns this year, which is 1/3rd better than the opponents they faced. Only one other team in the league scored more than them this year.

Social media lit up in awe of Sowers’ after the commercial aired, many inspired or appreciative of Sowers’ presence in the league.

One of the coolest parts of #MINvsSF so far.. @Michele_Tafoya (who broke down barriers as a female reporter) talking about @KatieSowers and Sarah Thomas.

Qualified women who did the work and have EARNED every opportunity. pic.twitter.com/rAigh6Rl7A

Great time to be a female football fan. https://t.co/vUkyifDUKF

I doubt she’ll see this, but a sincere shout out/congratulations/thank you to @KatieSowers for both changing the game and coaching up my beloved @49ers! #GoNiners #BeLegendary pic.twitter.com/G8Dw12FFPx

I showed my daughter the new Katie Sowers (49ers Female Assistant Coach) commercial. My daughter responded, “I want to be the first female NFL player.” Thanks @katiesowers

While the 49ers are very close, they will still have to defeat either the Green Bay Packers or their rival Seattle Seahawks next week to advance to Super Bowl LIV, which will be held in Miami next month.

View the Microsoft Ad below: