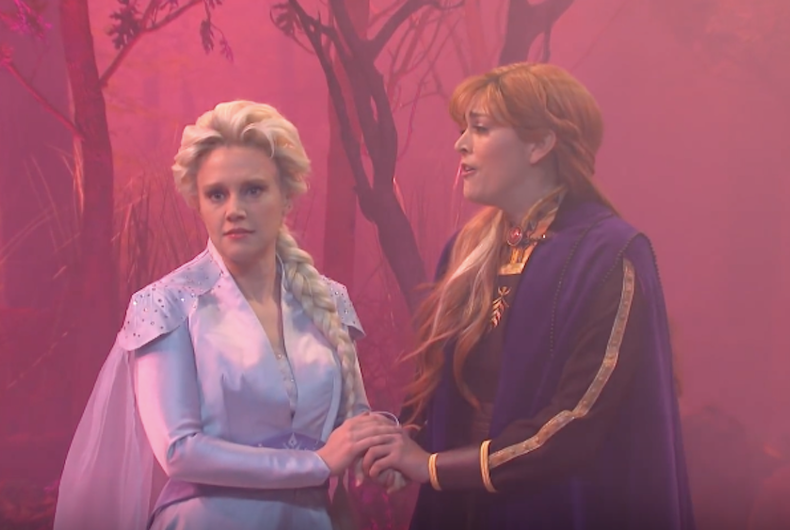 The parody seemingly acknowledges the 2016 social media campaign asking Disney to #GiveElsaAGirlfriend in light of her remaining unpartnered by the first film’s end.

Related: These Christian conservatives have a petition to stop Disney’s ‘LGBT indoctrination’

True to Frozen 2‘s actual plot, the sketch opens with Elsa lost in an enchanted forest. While inquisitively calling out other characters’ names, Elsa drops, “I’m gay?” into the list. When her sister Anna shows up, Elsa says, “I don’t know whether we’re heading north, south, gay or west.”

When Anna asks, “Did you say gay?”  Elsa responds, “Nooooooo! I’m not anything. You have a fulfilling heterosexual marriage at the age of 18 and I’ve just spent two whole movies playing with snow — both are equal and good. And then in Frozen 3, I can just freeze my eggs.”

Anna then sings a parody of Frozen‘s Academy Award-winning song “Let It Go” called “We All Know.”

“The lack of romantic interest doesn’t bother me anyway,” Elsa states unconvincingly at the song’s conclusion.

As the sketch continues, it introduces a “woke” ice-harvester Kristoff who is hunky but still sensitive, and a black royal guard who seems curiously shoehorned into the film’s all-white cast from 1840s rural Norway. There’s also a very naughty snowman with a curiously placed carrot.

The parody gently mocks social media users who wanted Disney to make Elsa lesbian after the first film’s success. At the time, teen activist Alexis Isabel Moncada, founder of the blog Feminist Culture, sparked the campaign with the hashtag #GiveElsaAGirlfriend.

Interestingly, Elsa has become a subversive queer icon in another way as a few parents have received praise for supporting their sons dressing up as her. One mom in the U.K. went viral after defending her son’s decision to dress as Elsa, a father went viral after he and his son danced in Frozen-inspired dresses, and yet another dad achieved viral fame for approving of his son’s dressing as Elsa for Halloween.

One teen was punished for wearing an Elsa costume to his school’s “Disney Day.” School authorities claimed the young man’s costume was a “disruption.”