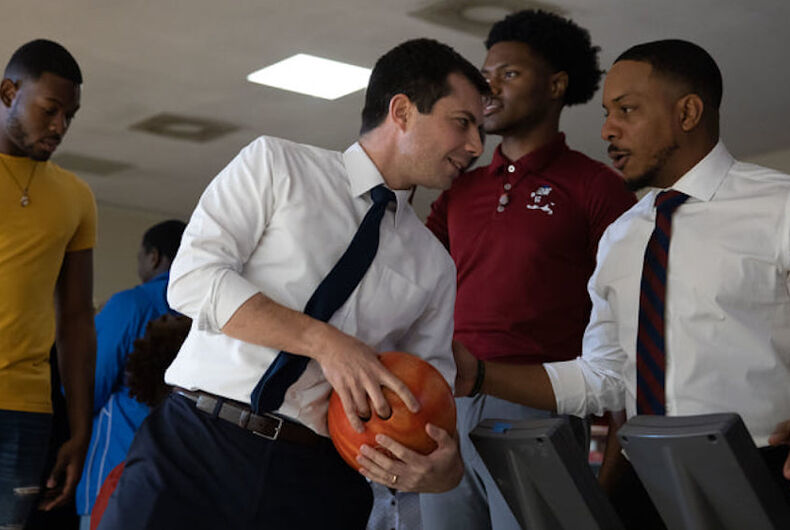 Imagine if a candidate running for office came courting the LGBTQ community after years of, at best, a mediocre and at times antagonistic relationship with a small group LGBTQ people. The community would be rightly skeptical.

Change the LGBTQ community to African-American voters, and that’s exactly the position that Pete Buttigieg is in.

Buttigieg has been on a listening tour in South Carolina designed to introduce him to Black voters. From a political standpoint, it’s a much needed strategy. While Buttigieg has been soaring in the polls in Iowa and New Hampshire, states with a large white population, he has been struggling in South Carolina. The Black population makes the state look a lot more like the Democratic Party’s actual demographics.

In fact, Buttigieg’s position among Black voters in South Carolina could hardly be worse. He’s been polling at zero percent.

Buttigieg’s campaign released results of a focus group it conducted among Black voters that pinned some of the blame for his showing on the voters’ seeing his sexuality as a “barrier.” No doubt the results were accurate, but it was also tone deaf. Just as white voters don’t like to hear themselves called a ‘demographic’, Black voters aren’t going to be flocking to your campaign if you blame your problems on labelling them as homophobic. (The analysis also glosses over Buttigieg’s troubled relationship with the Black community in South Bend, IN, where he is mayor.)

It is true that Black voters can be more culturally conservative than liberal white voters, but that’s because a group consisting of 42 million people – roughly an eighth of the country’s population- isn’t going to be a monolith.

The problem is that Democrats often treat them like one. Candidates often pander to them with poor stereotypical messages and vague platitudes to their culture.

When things aren’t going as planned, as in the case of Buttigieg’s campaign, it’s all too easy to pin it on Black homophobia. Setting aside the fact that no one talks about white homophobia being driven by race, Black people are more likely to recognize homophobia and transphobia is a problem than whites are.

That’s not to say that there are no Black homophobes – there are a handful of Black ministers and political figures who certainly come in handy for when the religious right wants to demonstrate that it’s not really racist.

What ends up happening is that white gay men like Buttigieg and Black people start talking past each other. Buttigieg has a point when he talks about his feeling of “otherness” as a gay man, but Blacks are looking at a privileged white man who never had a taxi pass by him because he is gay. The comparison just seems disproportionate at best, and insulting at worst.

Buttigieg, like many white gay men, is an outsider to the black community – well-intentioned, for sure, but just not connected.

What is hard to understand is why Buttigieg didn’t recognize this as an issue much earlier. After all, he has clearly had national ambitions for years. He ran for chair of the Democratic National Committee almost three years ago and (unsuccessfully) for statewide office in Indiana in 2010. He has had a career trajectory mapped out as a rising star in the Democratic party for almost a decade.

The fact that Buttigieg didn’t build strong relationships within the African-American community throughout that time is an incredible oversight. Maybe it’s because his home state of Indiana is pretty white, maybe it’s because his background put him on a path where the opportunities to interact with the Black community were limited. Whatever the reason, for someone as smart as Buttigieg, this was a real blunder.

African-American voters are foundational to the Democratic party’s success. They are a core constituency, just as the LGBTQ community is, but in far larger numbers. Without Black support, Buttigieg’s path to the party’s presidential nomination is very difficult.

So Buttigieg is stuck introducing himself to Black voters at the worst possible time. He brings some advantages, including his ability to speaker to church-going Blacks from his own faith experience, but it’s still an uphill battle.

African-Americans have a fair complaint that the Democratic Party takes them for granted except at vote time. That’s a complaint that LGBTQ voters have echoed in the past. It’s one that’s well worth remembering.