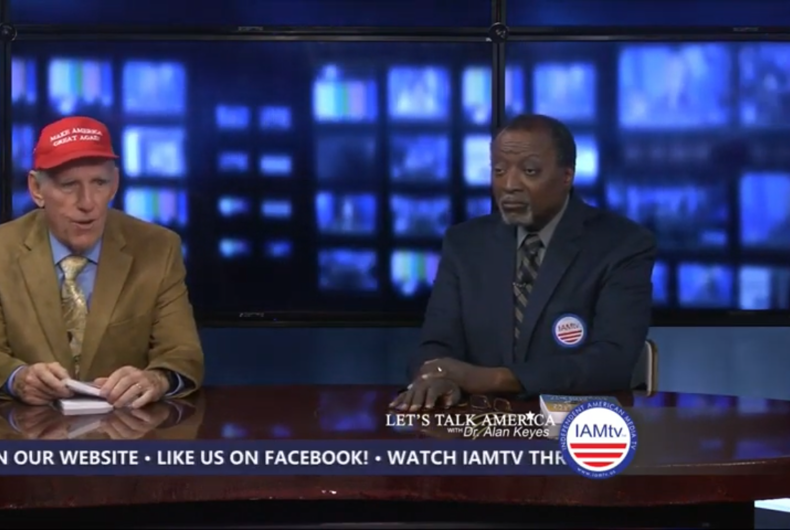 Bob Sisson (left) and Alan Keyes (right) featured in a video on IAMtv where they promote the bleach 'solution' as the end to 'Big Pharma'.Photo: Screenshot via YouTube

The “Church of Bleach”, a viral video advocating for people to take a miracle mineral supplement to absolve them of their sins, has been warned against by the FDA since 2010.

Now Alan Keyes’ network, Independent America Media TV (IAMtv), is sponsored by the supposed ‘solution’, which is reportedly nothing other than chlorine dioxide.

Keyes’ and IAMtv’s connection with the bogus miracle solution first became clear in August, when Bob Sisson, who also has an IAMtv show and claims to drink the “Miracle Mineral Solution” (MMS), proudly bragged about being able to share space with the likes of Kentucky Governor Matt Bevin and Tennessee Governor Bill Lee thanks to knowing Keyes. Sisson even openly dreamed of getting to meet Donald Trump in “only a matter of time” in the midst of showing off the solution.

The solution’s producer, the Genesis II Church of Health and Healing, has proudly offered seminars – $450 for entry, along with membership in the church – on the benefits of drinking bleach since April. Unfortunately, the story is made even more disturbing when it’s revealed that the Church produced video of them offering the MMS liquid as a solution for the malaria crisis in Uganda, where they also promote homophobic measures.

Also called the “Marvelous Mrs. Maisel Solution” by some, the solution was first introduced by ex-Scientologist Jim Humble, “who claims to be an alien god who arrived on Earth via ‘the space navy’.” Now, a The Daily Beast exposé has shed light on Keyes’ dangerous promotion of nothing but “a powerful bleaching agent” as a health supplement.

“Miracle Mineral Solution has not been approved by the FDA for any use, but these products continue to be promoted on social media as a remedy for treating autism, cancer, HIV/AIDS, hepatitis and flu, among other conditions. However, the solution, when mixed, develops into a dangerous bleach which has caused serious and potentially life-threatening side effects,” the FDA wrote in August.

While “The FDA is not aware of any scientific evidence supporting the safety or effectiveness of MMS products,” they have received reports of users “experiencing severe vomiting, severe diarrhea, life-threatening low blood pressure caused by dehydration and acute liver failure” from taking the liquid. NBC News reports that they have “found at least 2,123 cases of chlorine dioxide poisoning resulting in serious side effects” in the United States since 2014 alone.

According to the Daily Beast reports, IAMtv is not a “clearly profitable” venture at all, boasting only 300 subscribers on YouTube and only having Alan Keyes’ products and name as promotional effort for the network. They do, however, appear to have a studio in Uganda that Keyes and Sisson consistently work out of.

Now, in episodes as recently as October, the topic of focus has been Keyes’ and Sisson’s infactuation with MMS, and the supposed “benefits” it has for mankind. “I’m convinced that chlorine dioxide is going to be what God uses to bring down Big Pharma,” Sisson said to Keyes’ approval in an episode that featured the solution on screen.

A one time advisor to President Ronald Reagan and who had a MSNBC show in 2002, Keyes rose to recognition as the one-time senatorial challenger of Barack Obama who eventually failed to force the government to provide the President’s birth certificate in 2013. He has moved so far to the right, however, that he has even fallen off the moderate conservative radar – some of IAMtv’s YouTube videos have less than 5 views on them.

Keyes once compared the right for gay people to marry to that of people’s rights to pick their nose and eat their boogers at a Michigan college. In 2015, he applauded Dylann Roof’s mass murder at the Emanuel Church as “pro-gay terrorism” and claimed marriage equality was “just cause for civil war.”