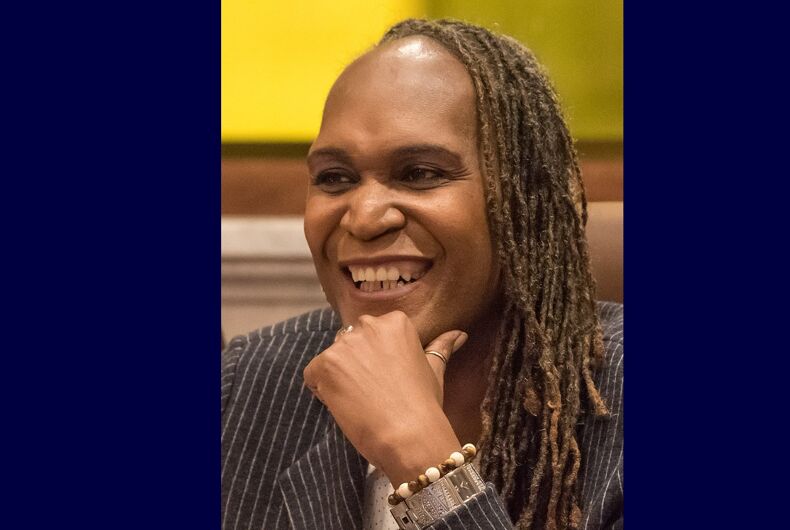 In 2017, Minneapolis made history when the city elected Andrea Jenkins and Phillipe Cunningham to the Minneapolis City Council, with both becoming the first openly trans Black elected officials in the country.

Now two years into their four year terms, both have brought a much needed trans perspective to city government, while also working towards the priorities of their constituencies. Last month, the city banned conversion therapy on minors, after a statewide effort failed to pass the state legislature.

Related: Four reasons why transgender people are running for office in record numbers

Jenkins in particular, who serves as vice president of the council, sees her role in city government as one of building bridges: between the Black and white residents, and between cis and trans residents of the city.

She sat down with LGBTQ Nation just before the conversion therapy ban was passed to talk about her first time and what having not one but two openly trans city council members has meant to the trans community in Minneapolis.

LGBTQ Nation: I remember your election quite well. But we haven’t talked really that much since then, so can you just give me an update on like where you are?

Andrea Jenkins: We’re feeling really good. Initially I was elected Vice President, so I’m in the leadership, and that puts me in all of the executive committee conversations and then the nominations of all of our department heads. I’m really proud of that. One of my campaign messages was leadership, access, and equity and not only have I risen to leadership on the council, but also, I chair the race equity subcommittee, which focuses on incorporating equity and inclusion in all of the work that we do as the city.

I’m chair of our internal transgender issues work group, and we hosted two transgender equity summits since I’ve been elected. We’ve been doing it for six years. It’s been really incredible that it continues to grow. We had over 430 attendees this year. We incorporated a job fair that had about 35 employers that were there to specifically talk to and hire trans and gender nonconforming people.

We hosted it at the, the world famous Walker Art Center, so it felt really good. The community I think felt really heard and included and we’ve seen a really big increase in inclusion.

In fact, my colleague Phillipe Cunningham, who is also trans identified, literally got involved in local politics through attending the first trans equity summit. I’m really proud of that. As a council as a whole, we have passed the most comprehensive zoning policy in the country. We up-zone the entire city to create for more housing production, more ownership opportunities for multifamily housing to address our affordable housing crisis, which I think is an issue throughout the country.

AJ: I’ve hosted two community events. The 38th Street Bridge [is] a bridge over the freeways which separated the Black and white community. When the freeway went through, it totally disrupted and decimated, to a very large extent, the African American community. This bridge served as a deterrent to keep the community separated and just recently, last year in fact, as a part of a total reconstruction, the freeway project, the bridge was reconstructed. [It’s now] more inviting, with more lighting, wider sidewalks, and art incorporated into the bridge work.

For the past two years, I have hosted a dinner on a bridge called, “Breaking Bread and Building Bridges.” It’s a really unique concept to have 300, 400 neighbors having dinner outdoors on the bridge as the cars are, are going back and forth. The story actually made the front page of the Metro section of the paper. I mean Minneapolis is a pretty large metropolitan city, so, you know, it’s not easy to make the front cover. I mean it’s got to be newsworthy. I’m really proud of that. In fact I would state that as one of my biggest accomplishments.

AJ: It really just a thousand percent opens the doors for the trans community to walk into city hall and feel comfortable enough to say this is what we demand, and to see us sitting there, it welcomes that level of engagement.

Not only that, last year during our budget season we had a transgender advisory committee at the city to advise the mayor and the city council on issues related to the committee. So they came in, and they testified, and they lobbied for a full time transgender equity coordinator.

They walked away with a part-time coordinator, which in our very competitive budget cycles, when, you [have] very limited resources. It’s weird to say $1.6 billion budget has limited resources. But with all the things that we need to do, it literally is. But we were able to get a part-time trans equity coordinator hire. And I think that is a testament that Phillipe and I are there.

Right now, we are working on banning conversion therapy in the city of Minneapolis. Phillipe and I are leading that effort and I’m positive that wouldn’t be happening if we weren’t there. It was introduced in the House this past legislative session, let’s say at the state levels.

QN: I actually knew that.

AJ: Yeah. But it never made it, it never got a hearing in the Senate. And, so subsequently it failed. The governor has said he wants to pass it this year but it’s still, I mean, the Senate is still, you know, Republican controlled.

So we are passing it in the city. I’m pretty confident we are going to do that. I mean we’re working on it and the support there. We are encouraging St. Paul and other cities around the state. And so, you know, we’re in it to lead this sort of statewide effort to put pressure on our state legislators to make this a statewide ban.

So I feel good about what we’ve been able to do in our first two years. Not only have we really been able to address issues and concerns that are relevant to the LGBT community, and the trans community even more specifically. But I think our records both show that, you know, we’re able to lead on issues that are important and the mandate of the much broader population and so we’re not just transgender elected officials, we are public servants who happen to be trans identifying.

QN: Right. But there’s no way you can take that identity off when you show up to city hall. Right?

AJ: There isn’t, there is no way. So the council meetings are televised. I always wear some purple identifiers so young kids can just get that sense that I’m there. We’re visible. We’re there for them. We’re contributing. Yeah. This month we’ve been able to get the bridge lit for Trans Day of Remembrance. So that’s pretty exciting.