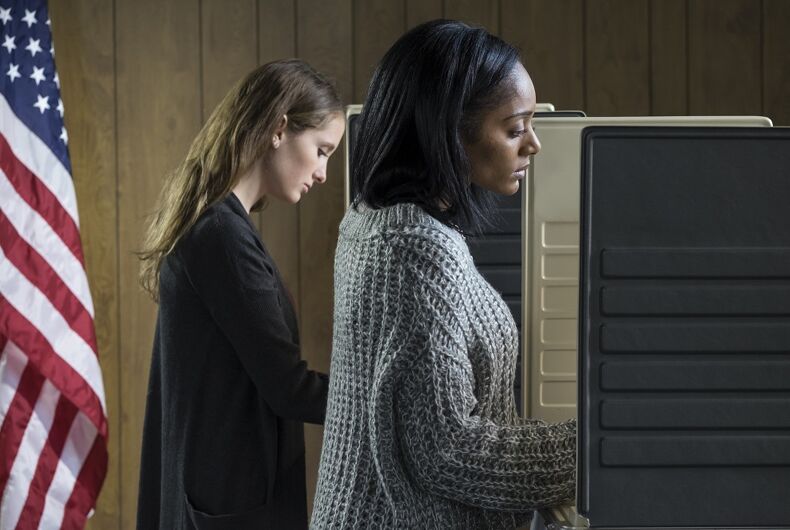 A transgender woman says that she faced discrimination at a polling place in North Carolina.

The woman, who doesn’t want to be identified in the media, said that poll workers in Mecklenburg County singled her out and forced her to show ID when ID isn’t required to vote in the state.

Related: The GOP is trying to suppress 34,000 transgender voters today

She went to vote earlier this week at the Cornelius Town Hall precinct, where she filled out a form to get her ballot.

The issue, according to the judge, was that the woman’s “face doesn’t match [her] name.” The judge did not explain how a name could or could not match a face, but the woman believes the judge was referring to her transgender identity.

“I said, ‘Why must you see my ID when it’s not a requirement?’ She looks at me, eyeball to eyeball, and tells me, ‘For you, it’s a requirement.’ I said, ‘Well, why me? Is it because I’m transgender?’”

She did eventually show her ID and was allowed to cast her ballot. But she said that she was humiliated by the experience and feels she was discriminated against.

The state of North Carolina will not require voters to show ID until next year.

Mecklenburg County’s Board of Elections Director Michael Dickerson said that she should not have been asked for ID in order to vote, but that the poll workers will not face repercussions. Instead, he said that he wants them to get better training on transgender and non-binary voters.

“This is an excellent time to not just single someone out, but say, ‘We all need to be aware of this,’” he said.

In 2013, North Carolina passed a voter ID law. That year, a federal court found that the law was passed with “discriminatory intent” to prevent black people from voting “with almost surgical precision.” The court heard how the law was based on African American voting and registration patterns.

In 2018, the state legislature passed a different voter ID law to go into effect in 2020 after voters approved a state constitutional amendment requiring photo ID be shown to vote. A lawsuit has challenged the new law, but a court said that it could be implemented in the meantime.

As the woman in Cornelius shows, voter ID laws negatively impact transgender people’s ability to vote. Photo ID can out a transgender person and cause them to face discrimination or be prevented from voting if their gender presentation doesn’t match the gender marker or their photo on their ID.

Earlier this year, California became the first state to require training on transgender and non-binary voters for poll workers.