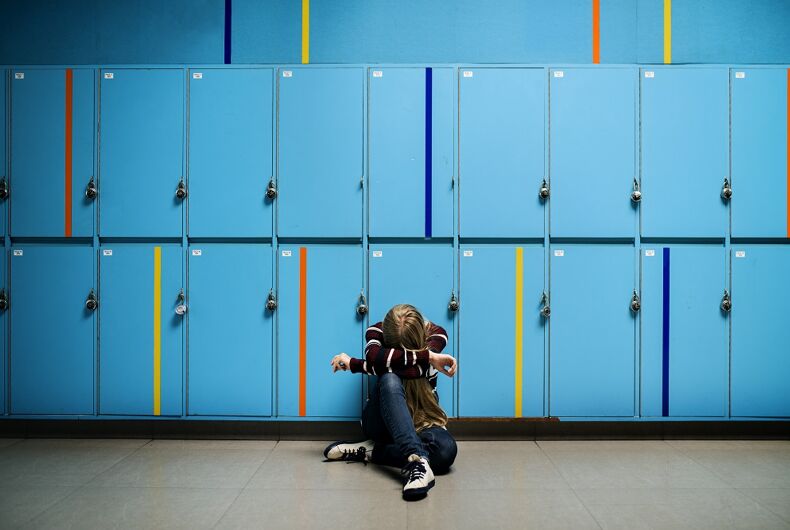 A California teen who said that her school forced her to see a psychologist for being gay is now speaking out.

Magali Rodriguez says that teachers and administrators at Bishop Amat Memorial High School in Upland forced her to follow strict rules to keep her from having a relationship with another girl and terrorized her for years. She also said that the school took steps to avoid her parents finding out that they were disciplining her for being gay.

Rodriguez said that she came out to some friends in middle school and that she started dating another girl when she was in ninth grade at her Catholic high school.

She said that she knew that the Catholic Church doesn’t accept LGBTQ people, but she thought people at her school were more open-minded.

“I was surrounding myself with people that were really involved in their religion, but still accepting,” she told Buzzfeed News. “So I never thought there was anything bad about it.”

That changed when she and her girlfriend were pulled into the dean’s office for discipline. The dean told them that there were “complaints about the relationship” and that it was wrong and couldn’t happen at the school.

The dean said that they would no longer be allowed to sit next to each other at lunch and they couldn’t interact with each other during breaks. They would also have to regularly meet with the school psychologist and the dean, and teachers would keep an eye on them to make sure they followed the rules.

The dean said that he wouldn’t contact Rodriguez’s parents if she followed the rules. She wasn’t out to her parents at the time and was scared, so the teens agreed to the dean’s terms.

“We both walked out of that meeting just sobbing,” Rodriguez said.

Even though public displays of affection were common at the school among straight couples, the girls were followed closely by teachers for the next two years. Rodriguez said that a teacher stared them down during a class picnic, even as a straight couple made out nearby. They sat next to each other at lunch one day and another teacher moved to stand right next to them.

After school one day, the girls were talking while waiting for a ride and a teacher came over to yell at them and tell them that they were going to Hell and that they should be expelled. Rodriguez said that the teacher disappeared when her father showed up.

“We were really afraid on campus,” she said. “We didn’t hold hands, we hardly hugged or anything.” Other queer kids took notice and decided not to come out or to transfer to a different school.

Rodriguez started to dread going to school. She would spend the entire day at school feeling anxious. By her senior year, her girlfriend had graduated and she didn’t have her support anymore.

“I thought to myself, I don’t know how much longer I can go,” Rodriguez said. She was finally ready to come out to her parents and ask for help, writing them a letter explaining the whole situation.

“It sounded like a suicide letter,” said Nicolas Rodriguez, her father. “It was a huge cry for help.”

Her parents put her in a different high school, and she’s now finishing her education there.

“I wouldn’t be proud if I got a diploma from Bishop,” Rodriguez said. “What they showed me about what they stand for and their true values isn’t what they really live up to.”

A spokesperson for Bishop Amat Memorial High School said that the school does not believe Rodriguez’s story is “entirely accurate,” but did not comment further, citing privacy laws.

“Any student who is involved in a relationship may socialize appropriately on campus,” the school said in a statement. “However, as stated in the Parent/Student handbook, engaging in excessive displays of affection on campus is not permitted.”

Oddly, the statement also cited the school’s anti-discrimination statement, which does not include sexual orientation.