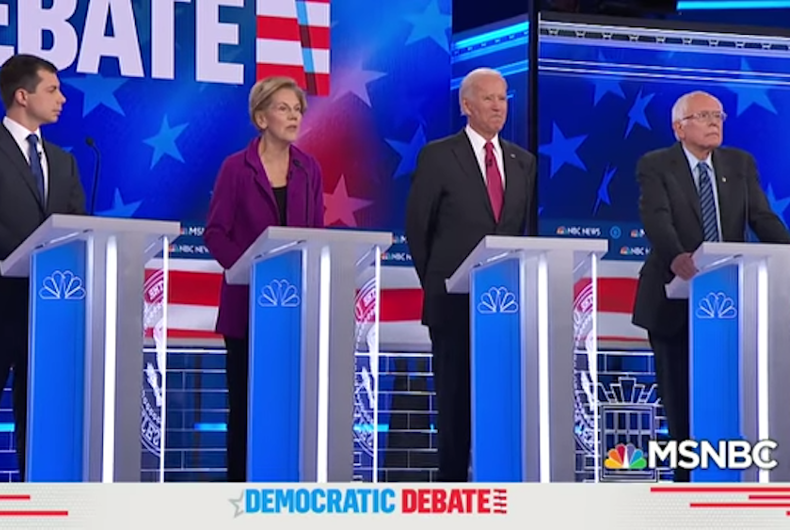 During a campaign, candidates make small distinctions in their stands sound like enormous philsophical differences. Sometimes there are genuine differences. Eliminating the private health care market is a lot more expansive than just making Medicare available to anyone who wants it. But often the differences are a matter of degree, not substance.

So when it comes to LGBTQ policy, would there be a big difference if it was President Biden in the White House compared to President Warren, President Sanders or President Buttigieg? The short answer is, probably not.

That’s not to say that there wouldn’t be differences. Buttigieg’s mere presence in the Oval Office would send a powerful statement about LGBTQ progress that obivously no other candidate could match. The psychological benefit to LGBTQ youth seeing a gay man as president would be enormous and shouldn’t be discounted. Warren’s ability to crack the glass ceiling would also send a message to women everywhere.

But what would the differences among the major Democratic candidates be in terms of policy, the nuts and bolts of governing?  Whichever Democrat wins the nomination, they will largely be reading from the same playbook.

The major issues will be the same for whoever is president and the remedies won’t change much no matter who it is. Appointing judges who are going to be s atrong counterbalance to the far-right appointees Trump has loaded the federal courts with. Undoing the damage that Betsy DeVos has done at the Department of Education.  Allowing trans military personnel to serve again. Working to get the Equality Act through Congress. Ensuring health care coverage for LGBTQ people at an affordable price.

A glance at the candidates’ LGBTQ policy statements reveals that they are pretty similar. In addition to the above promises, a few other themes emerge. For example, most of the candidates are calling for a national ban on conversion therapy for minors and programs to help LGBTQ homeless youth. Ending the epidemic of violence against transgender women of color is another common pledge.

Buttigieg and Warren have released detailed policy plans, as has Kamala Harris. Most of the other candidates, including Sanders, Cory Booker, and Julian Castro, have statements on their campaign sites with some details about how they would support LGBTQ rights.

Perhaps the candidate with the most riding on LGBTQ policy issues is Biden. Biden has been suffering from the two-edged sword of experience: he knows his way around Washington, but he also has a long track record to pick apart.

At his appearances this fall at two LGBTQ-focused candidate forums, Biden was forced to defend his 1993 vote for Don’t Ask, Don’t Tell and other low points in Democratic party politics of the past 30 years. (While Biden voted for DADT legislation, it was part of a larger bill tied to military appropriations. Biden had previously voted in favor of a stand-alone amendment opposing DADT.)

That’s a legitimate exercise. However, the real question is how much of the past is predictive of future policy. There’s not much reason to believe in Biden’s case that he hasn’t evolved, much like the Democratic party as a whole. In fact, it was Biden who pushed the Obama White House to accelerate its acceptance of marriage equality when he blurted out during an interview that he believed in it.

“When it comes to our LGBTQ community, Joe has an unmatched record of driving equality, justice, and inclusion,” Jamal Brown, Biden’s national press secretary, told LGBTQ Nation. Indeed, Biden is striking many of the same notes that his rivals are, with an additional emphasis on tying foreign aid to LGBTQ rights.

Brown’s high-profile position in the campaign–he’s an out gay man of color–should also be a sign of what a Biden administration would look like. While Biden hasn’t the same detailed policy statement that Buttigieg, Warren and Harris have, there should be one in the coming months that will provide more of an opportunity to see how Biden compares.

None of this is to say that Biden deserves to be the slam-dunk choice for LGBTQ voters. But in terms of policy choices, none of the major Democratic candidates is likely to be very different once in the White House. Stylistically, though, there may be a world of difference. But in terms of policy, probably not much at all.

Whatever the reason, Democratic voters can be confident that they will choose a nominee who is without question committed to LGBTQ rights. That will be a relief from the current occupant of the White House.

This post has been updated to clarify Biden’s vote on Don’t Ask, Don’t Tell legislation.