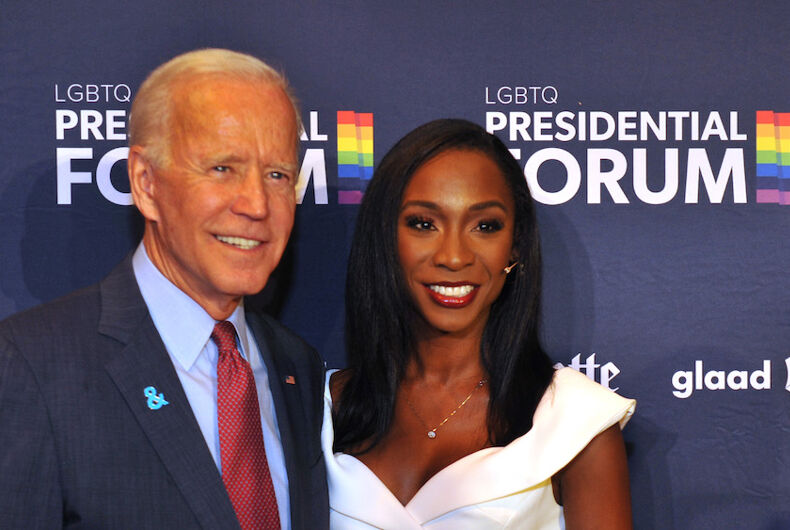 The first ever LGBTQ presidential candidate forum was held last night in Cedar Rapids, Iowa, and 10 candidates from the seemingly endless list of Democrats running showed up. From the perspective of getting the candidates to go on record with their promises to the LGBTQ community, it was a success. As an opportunity to get in-depth responses from each of the candidates, the forum was more of a mixed bag.

Related: Democrats’ chances of winning the Senate in 2020 are looking a lot better

A large part of the problem stemmed from restrictions that the Democratic National Committee imposed on the event. The DNC sets the ground rules for debates, and it didn’t want any other group horning in on its territory. As a result, the format was for each candidate to have a few minutes to answer an opening question (most often asked: what would you do in your first 100 days as president?). That was followed by a few questions from one of three rotating moderators.

The effect was a bit like political speed dating. You got a sense of who the candidates were, but just as it got interesting, time was up. And for some of candidates, we don’t know what they would have said since they didn’t show up. Chief among these was Bernie Sanders, who cited a scheduling conflict. But Andrew Yang, who is polling better than some of the candidates onstage, didn’t show up either.

That said, there were a few clear takeaways from the forum. One is that Elizabeth Warren is a good campaigner. Instead of answering the question about her first 100 days, she began by reading the names of 18 trans women of color who have been murdered this year. “It is time for a president of the United States of America to say their names,” Warren concluded.

Warren won the audience over with that powerful moment, and her energy level revved up the audience. Out of all the candidates, she seemed the one who was actually enjoying herself. Cory Booker came in a close second, with his eloquent plea to bring the country back together.

Not doing himself any favors was Joe Biden. Grandpa Joe was on display at the forum, and it wasn’t an inspiring sight. Biden clearly thought he’d make his own opening statement and seem put off at having a question thrown at him at the start. The questioning, by Lyz Lenz, a Cedar Rapids Gazette columnist, was by far the most antagonistic that any candidate faced, and Biden didn’t handle it well. (The Gazette, along with GLAAD, OneIowa and The Advocate, sponsored the forum.)

Because Biden has been around for so long, he has a record rich for mining. Lenz pressed Biden about his record supporting crime legislation and Don’t Ask, Don’t Tell, and his opposition to marriage equality. Biden tried to charm Lenz by calling her “a lovely person”; Lenz told The New York Times afterwards that she found Biden “condescending.”

Interestingly, Tulsi Gabbard, whose past record on LGBTQ rights was far worse than Biden’s, didn’t get pressed nearly as hard about her positions which couldn’t, unlike Biden’s, be attributed to a different era.

As the sole LGBTQ candidate, Pete Buttigieg met with a rapturous response. Buttigieg gave thoughtful responses to his questions (as usual), especially about how he’d change the FDA’s ban on blood donations from gay men. “We are still living with the long tail of prejudices that should have been abandoned a long time ago,” Buttigieg said.

The problem with many of the promises (and the premises of the questions that prompted them) is that promises are easily made if you don’t have to worry about how to make them happen. All the candidates promised to sign the Equality Act into law, but no one suggested just how they could get the bill through Congress, especially if Republicans control the Senate. There were promises to get ban conversion therapy, but just how the president can make that happen was left unsaid.

Some changes are easy to make, like ending the ban on trans military personnel. But there were some popular, if silly, promises, like Amy Klobuchar’s vow to fire Education Secretary Betsy DeVos. The odds that DeVos will stick around for President Klobuchar to fire her are zilch. But one thing is clear, at least from the candidates who showed up: the courtship of the LGBTQ vote will be a major focus of the 2020 Democratic nominee whoever that might be.

The ‘Downton Abbey’ movie erases Thomas’s gay history. And ours.

Jonathan Van Ness from ‘Queer Eye’ comes out as HIV-positive