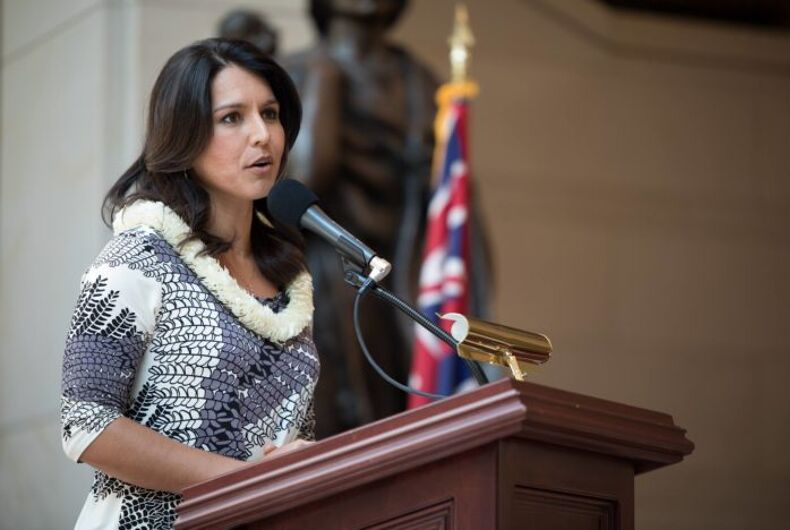 Presidential contender and Representative Tulsi Gabbard (D-HI) said this weekend that she never supported conversion therapy, despite working for an organization that promoted it.

A member of the audience at a town hall forum at SXSW in Austin, Texas, asked Gabbard what led to her changing her opinion on LGBTQ issues.

Gabbard, after talking about growing up in a “very socially conservative home” with a Catholic father, said that she never supported conversion therapy and didn’t even know it existed until she became a member of Congress.

Related: Is past opposition to LGBTQ rights now the third-rail for Democrats?

Gabbard worked for one of her father’s organizations, The Alliance for Traditional Marriage, which she later cited as a positive experience when she ran for the state legislature in 2002.

The Alliance for Traditional Marriage’s website, which appears to have been written by Gabbard’s father, had an FAQ that promoted conversion therapy.

Can homosexuals change their sexual orientation?

Yes, of course. The bottom line is: We don’t accept the fictitious homosexual or gay identity. Homosexuality is a behavior, not an identity. In other words, there is no such thing as a homosexual or “gay”. Historically, the word “homosexual” didn’t exist until the mid 1800s, and when it was originally coined it referred to “homosexual attractions” not an entity or person known as a “homosexual.” These labels are simply political constructs created by homosexual activists to achieve their goal of societal acceptance. Our position is this: Humans are born heterosexuals. It’s simple, just check the plumbing. The vast majority of us have sexual desires for the opposite sex, while a small minority have homosexual, bi-sexual, or omnisexual desires. Then you’ve got some people who have sexual desires for children, animals, dead bodies, or whatever.

So what we’re dealing with here are tendencies, desires, feelings, urges, and behaviors, not personal identity. The major question to consider is: Can a person control their sexual desires and urges? Obviously, the answer is yes. A married man meets an attractive flirtatious woman in the supermarket who says, “Come home with me.” Whether he turns her offer down because he’s afraid he’ll get AIDS, or whether he’s motivated out of love for his wife, the fact is: he said no to that sexual urge. He controlled his mind.

Similarly, for those who experience the urge for sexual activity with someone of the same sex, it’s possible to overcome those sexual desires, no matter how powerful they may be. It is possible to redirect or rechannel that sexual energy in a different direction.

Compulsive sexual craving, regardless of one’s so-called sexual orientation, is a spiritual problem. Because we are by our very nature, active, loving spiritual beings, we crave love–we want to love someone and we want to be loved. Because this is a spiritual craving, it cannot be satisfied in the material dimension. The only person who can satisfy this craving is the Supreme Lord, our dear Father, our dear Master and Friend.

This is why Lord Jesus Christ commands us to love God with all our hear, mind and being. Actually, if you read the Koran, the Vedas, the Torah–the message is the same: place your love, first and foremost on God. He is the only source of real happiness, real fulfillment, real love.

So, to answer your question, yes a person can change. A person can walk away from homosexuality if they are repentant, sincere, and determined. For many, it’s a very difficult path. But thousands have successfully left the “gay” lifestyle.

There are some excellent “ex-gay” organizations out there such as Exodus, Courage, and Homosexuals Anonymous, made up of former homosexuals–both men and women–who are actively helping those who struggle with homosexual desires. In addition, the National Association of Research and Therapy of Homosexuality (NARTH), a group of dedicated psychologists and psychiatrists has a remarkable success record in helping people who experience homosexual tendencies or urges to overcome those desires.

Conversion therapy is a necessary belief for homophobia as an ideology. In order to believe that homosexuality is morally wrong, it has to have a moral dimension, which requires some belief that it is a choice.

This means that homophobes have to make up a narrative of change from homosexuality and bisexuality where conversion is difficult, but possible. The alternative – that queer people are just straight people who have sex with other people of the same sex every now and then for no reason at all – is too ridiculous, even for them.

Gabbard appears to be saying that all of this went over her head, which may be true since people who follow hateful ideologies often don’t fully understand the implications of their beliefs.

But what Gabbard was saying at the time – that same-sex couples marrying harms “the common good” and that only “homosexual extremists” disagree – is part of a system of beliefs that includes conversion therapy, something that her employer at the time understood.

Gabbard has since apologized for her anti-LGBTQ statements. At the town hall, she said that she “became very good friends” with “gay and lesbian and trans service members” when she was in the military, and that changed her opinion.

She currently has a 100 on HRC’s Congressional Scorecard for her time as a U.S. Representative.

This high school prom bans same-sex guests, even after a lawsuit about it