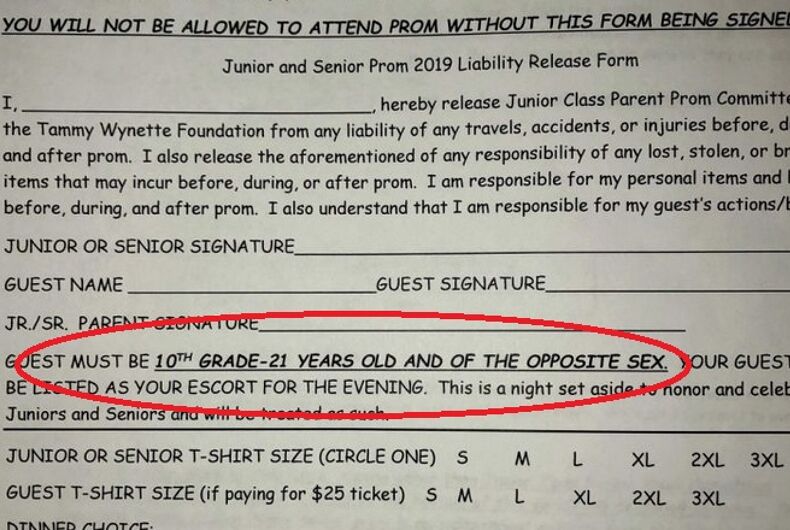 A high school is coming under fire for banning same-sex guests at their prom.

Students at Tremont Attendance Center, a public school in Tremont, Mississippi, were told to sign paperwork that bans same-sex guests to prom.

“Guests must be 10th grade-21 years old and of the opposite sex,” a liability release form says.

“This is a night set aside to honor and celebrate our Juniors and Seniors and will be treated as such,” the form says in the same paragraph, possibly as an explanation for the ban on same-sex guests.

Related: Was Constance McMillen sent to a decoy prom while classmates partied elsewhere?

A different informational form about the prom lists its “policies.” The third policy is “Guests must be of the opposite sex.”

A parent involved with prom organization said on Facebook that they don’t want to discrimination, they are just attempting some “crowd control.”

Their fear is that students will invite anyone as guests, not real dates. The policy, though, allows students to bring friends as guests as long as their friends are of the opposite sex.

The superintendent of Itawamba County Schools, Trae Wiygul, said in a statement that the prom isn’t sponsored by the school, that it’s just being organized by some parents.

An unnamed student at the school said that multiple teachers are passing out information about the prom and that the principal made an announcement about it over the intercom, according to Yahoo! Lifestyle>. That announcement mentioned the ban on same-sex dates.

If this story sounds familiar – a private prom organized by parents that discriminates against LGBTQ students – that’s because this same thing happened in 2010 in the same school district.

The principal told her that she couldn’t bring a same-sex guest, citing a concern that students would try to buy cheaper couple’s tickets and just go with their friends.

With help from the ACLU, she sued, and the district canceled prom. Parents then organized a prom at a private country club and did not invite McMillen.

A teacher is on the committee planning the prom at Tremont. Wiygul said that the teacher is being investigated.