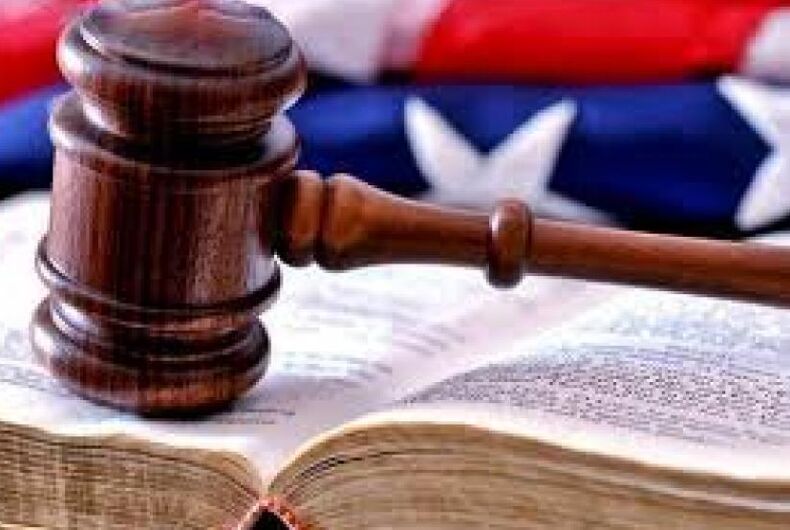 We’re half way through the Trump presidency. Unfortunately, we’re far from halfway through the impact of Trump’s vicious anti-LGBTQ policies. As a new report from Lambda Legal reminds us: For decades after Trump is gone, his legacy will continue to plague us in the courts.

The report, Trump’s Judicial Assault on LGBT Rights, documents the little-noticed success that the administration has had in populating the federal courts with right-wing ideologues. While Supreme Court nominees Neil Gorsuch and Brett Kavanaugh attracted lots of attention, Trump and his fellow Republicans have been confirming equally dreadful judges at a rapid clip, more than double the rate last year than the year before.

The profile of the judges is every bit as bad as you’d expect. According to the report, one in three has openly demonstrated bias against LGBTQ rights. But that number is deceiving. The remaining judges just may not have had a chance to exhibit their bigotry.

A full 85 percent of Trump judges are members of the right-wing Federalist Society, an ideological clearing house of conservative lawyers.  The Federalist Society conducts a litmus test on LGBTQ issues to ensure that its members oppose them. Membership in the Federalist Society is practically a guarantee that a nominee it approves of will rule against LGBTQ rights on the bench, which is in line with the Society’s stated goal of undoing what it calls the “Judicial Legacy of Barack Obama.”

As you would expect, the new judges aren’t the cream of the legal crop. Stuart Kyle Duncan has called transgender people “delusional.” L. Steven Grasz worked for the far-right, anti-LGBTQ Nebraska Family Alliance. Grasz, along with three other Trump nominees, have been rated “unqualified” by the American Bar Association, a rating that did nothing to give Republicans pause.

Already, Trump appointees comprise at least a quarter of the judges in five of the 12 federal Circuit Courts. The Circuit Courts are the stepping stone to the Appeals Court, which is just one step below the Supreme Court. In essence, Trump has created a pipeline that future conservative presidents can draw upon.

Federal judgeships are lifetime appointments. Trump may be gone by 2021, or 2025 at the latest. But the judges, many of them relatively young, have decades ahead of them in which they can cause irreparable damage to us.

“The United States Senate—Democrats and Republicans alike—owe it to the American people to be more than just a rubber stamp for every nominee that the Trump Administration puts forward for consideration,” the Lambda report concludes.

“Advice and consent is not just a suggestion, but rather a constitutional obligation, particularly during this tenuous time in our nation’s history. Otherwise, the damage done to our constitutional democracy will be felt for many decades to come, and may be devastating especially among the LGBT community.”

It may already be too late.