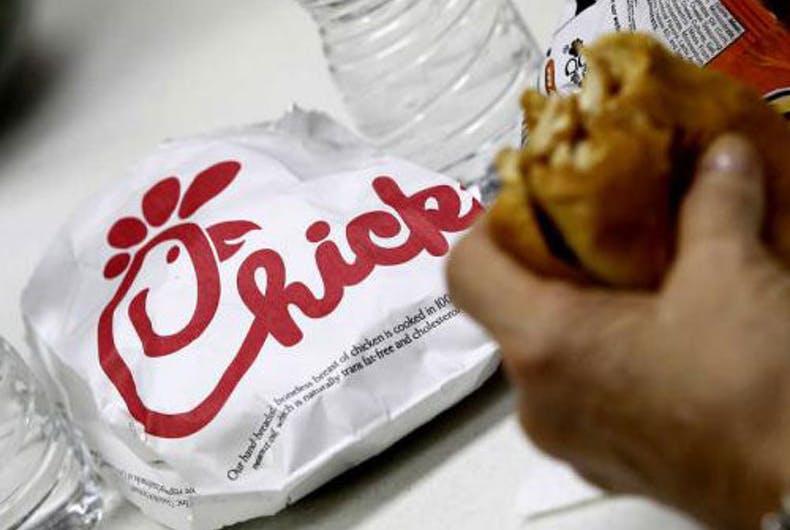 A minor league baseball team ran a promotion that involved Chick-fil-A on their Pride Night.

See you all later on for Pride Night at McCoy! 🏳️‍🌈 pic.twitter.com/HCOTvKcFIW

But apparently they didn’t see any contradiction between that and holding a promotion for Chick-fil-A, the fast food chain that has donated millions over the years to anti-LGBTQ organizations.

Related: Chick-fil-A is about to get thrown off another college campus for being antigay

That wasn’t the only awkward move at the game. The first pitch was thrown by former Trump administration Communications Director Sean Spicer.

“The PawSox are having Sean Spicer throw out the first pitch on Pride Night,” sports columnist Britni de la Cretaz tweeted. “What an insult to all their queer fans.”

Spicer, whose job it was to make Trump look good, wrote a tell-all book last year called The Briefing: Politics, the Press, and the President. He wrote that Trump’s mention of LGBTQ people during the 2016 Republican National Convention only happened because a delegate refused to support Trump if he didn’t support gay rights, not a commitment to LGBTQ equality.

Also, Spicer wrote that Republicans won because of transphobia.

“Hillary and the Democrats played identity politics,” Spicer wrote. “Whatever you believe about transgendered [sic] bathrooms, they don’t put meals on the table for an unemployed welder in Michigan.”

Er, OK. Most issues parties support have little to do with providing food for unemployed welders in Michigan.

So perhaps businesses that want to celebrate Pride should do a little more research and listening before slapping a rainbow on their logo.