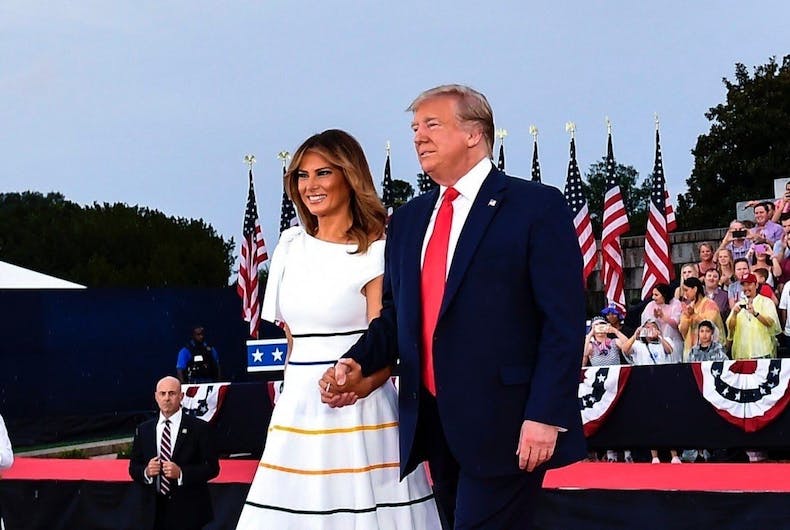 Melania Trump has proven such an enigma that people have taken to parsing her wardrobe to determine what she’s thinking. Remember the famous “I really don’t care. Do U?” jacket? The First Lady insisted it was just a coat, not a political statement, an explanation greeted with the same level of skepticism as anything else coming out of the White House.

So now there’s a new question about Mrs. Trump’s latest fashion choice. At the big Fourth of July that her husband threw in his own honor, the First Lady showed up in a Caroline Herrera dress — with rainbow stripes. The dress immediately prompted questions about whether Mrs. Trump was secretly sending a message of support to the LGBTQ community.

“The symbolism could not have escaped the first lady’s office, or her stylist, Hervé Pierre,” The New York Times concluded.

Unlike other First Ladies, Mrs. Trump buys her clothes from existing collections and doesn’t have them made specifically for her or the occasion, making it hard for anyone to determine the reason for her choice. The Herrera dress currently sells for about $1,900.

Moreover, it’s not the first time that the First Lady decided to wear a rainbow-themed dress around Pride. In 2017, she wore a dress with a rainbow grid to the White House Congressional picnic, which was held the same weekend as Pride.

Whether Mrs. Trump is trying to send a message with her clothing choices is something we’ll probably never know. It’s also something that her husband would never notice. In the most recent case, however, the First Lady may have been sending an inadvertent message too. The rainy weather made the dress a likely entry in a wet t-shirt contest, with all the reveal you’d expect at that event.