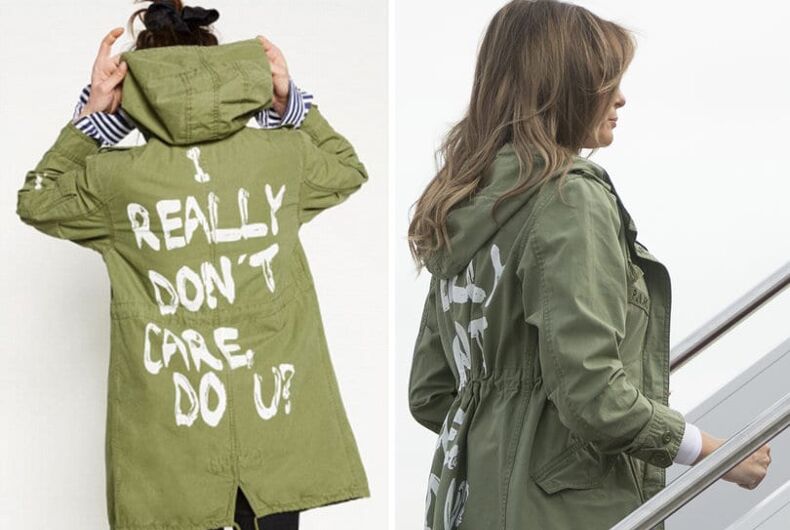 Yesterday the world realized what Melania Trump has been trying to tell us since her husband announced his candidacy. She wants nothing to do with any of it.

When the First Lady wore a cheap Zara jacket yesterday, with the words “I really don’t care. Do U?” emblazoned across the back, for a “surprise” visit to her husbands child internment facilities, the world erupted in shock and condemnation.

The White House quickly tried to explain away the choice of clothing for such an important visit.

“It’s a jacket. There was no hidden message. After today’s important visit to Texas, I hope the media isn’t going to choose to focus on her wardrobe,” East Wing communications director Stephanie Grisham told CNN.

They failed to explain why the First Lady needed a jacket at all. It was in the high 80s and humid in DC yesterday and even hotter in Texas.

Mrs. Trump wasn’t wearing the jacket when she landed in McAllen, Texas, but had it back on when she deplaned back at Andrews Air Force Base after returning from her trip.

Today’s visit w the children in Texas impacted @flotus greatly. If media would spend their time & energy on her actions & efforts to help kids – rather than speculate & focus on her wardrobe – we could get so much accomplished on behalf of children. #SheCares #ItsJustAJacket

It didn’t take long for the President to lash out on Twitter, flatly saying the jacket’s message was meant to send a message.

“I REALLY DON’T CARE, DO U?” written on the back of Melania’s jacket, refers to the Fake News Media. Melania has learned how dishonest they are, and she truly no longer cares!

Of course, the First Lady’s career in fashion and love of high dollar clothing only emphasizes the likelihood that the pick of a $39 jacket was purposeful. Either she picked it to send a message or she agreed to wear something an administration stylist chose for her. No matter the option, the result is clear.

She shunned the campaign trail. She’s batted away Trump’s attempts to hold her hand in photo-ops repeatedly. She avoided living in the White House for as long as possible, eschewed most of the traditional First Lady roles, and openly mocked the country’s disgust for her husband’s online bullying by starting a #BeBest campaign to “battle” online bullying.

And after yesterday’s “unexpected” visit to the child internment camps, she didn’t express disgust, concern, or an ounce of compassion. Instead, she thanked the staff complicit in the abduction and abuse of babies and children.

She gave a tacit thumbs up to Trump’s decision to rip children away from parents despite knowing there’s a high chance they’ll never see their family again. She endorsed his “change” to his own policy that still arrests and persecutes refugees and immigrants, but keeps families together in prison.

Mrs. Trump is an immigrant. She is, by all reports, a doting mother. She willingly married a monster.

She will never be the quiet advocate or staunch defender of the republic that people want her to be. She will not stop Trump from destroying the country.

Today's visit to #Texas to spend time with children & thank the many hardworking individuals helping to care for them was very meaningful. Thank you to @SecAzar @HHSGOV for traveling w me today & the care you are giving these children in such a difficult time. pic.twitter.com/P5orrJ4k6p

Now THIS is how you get ready for Pride weekend