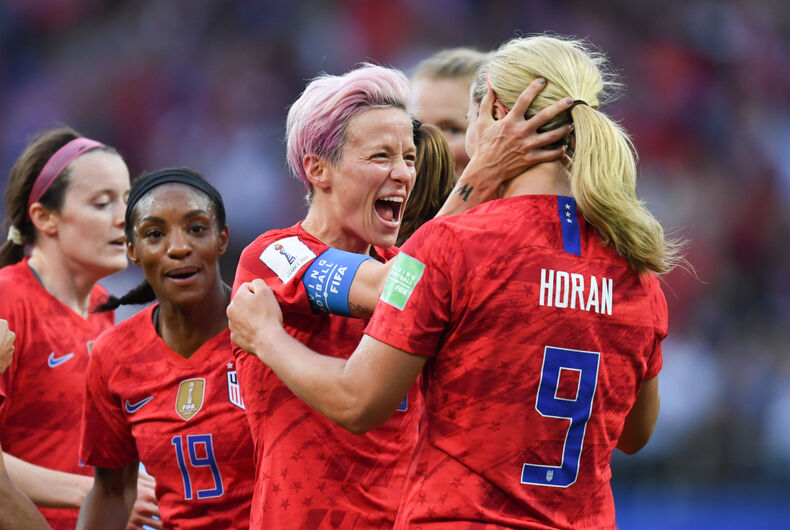 The final match of the 2019 FIFA Women’s World Cup happens tomorrow at 11 a.m. EST at the Parc Olympique Lyonnais in France’s eastern Décines-Charpieu region. The two teams facing off — the U.S.A. and the Netherlands — both have the highest number of openly queer players, making their match possibly the queerest pro-soccer game of all time.

Outsports.com reports that each team has five players identifying as lesbian or bisexual, and the American team also has a queer coach.

Among the American team’s queer players is out lesbian co-captain Megan Rapinoe, the player most recently known for drawing President Trump’s ire after saying “I’m not going to the f–king White House” if her team wins the World Cup. Rapinoe has also stood out for her refusal to sing the National Anthem before games (a protest of anti-black police violence in solidarity with former NFL player Colin Kaepernick) and is dating WNBA All-Star Sue Bird.

But while Rapinoe has been the media darling during the tournament, Outsports says that out Netherlands player Danielle van de Donk will be the force to watch as she tries to score against the U.S. team.

As we reported earlier, there are at least 30 out women playing in the Women’s World Cup, the highest number of out players ever to participate in the international sporting event. During the last one in 2015, the number of out participants was 18.

The total number of lesbian and bi players is probably much higher than 30, but some players probably can’t come out because they live in conservative countries or even ones where same-sex encounters are illegal, like Cameroon, Jamaica and Nigeria.

But it’s still astounding when you consider that none of the men playing at the 2018 World Cup were out as gay or bisexual.

The final match will be viewable on FOX and Telemundo in the United States.

Was Melania Trump secretly celebrating Pride at the Fourth of July parade?