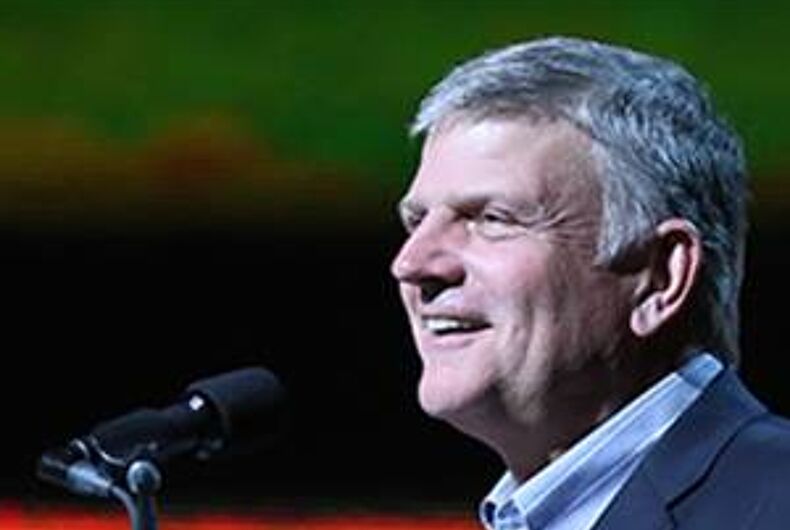 In Trump they trust.

More than 250 religious right leaders are calling on their followers to make tomorrow, June 2, a “Special Day of Prayer” dedicated to asking God to “protect, strengthen, embolden and direct” the president.

The crusade is being led by Franklin Graham, the multi-millionaire preacher and politico who used to wish aloud that the U.S. were more like Putin’s Russia. Apparently in Trump, his wish has been fulfilled.

“President Trump’s enemies continue to try everything to destroy him, his family, and the presidency,” Graham said in a Facebook post. “In the history of our country, no president has been attacked as he has. I believe the only hope for him, and this nation, is God.”

Graham’s portrayal of the Trumps as America’s First Victims is pretty rich, given that Graham once said President Obama was the Antichrist and Michelle Obama was “the whore of Babylon.”

After being criticized by some religious leaders for the day of prayer, Graham doubled down. “If the president was brought down for whatever reason, it could lead to a civil war,” Graham insisted. “There are millions of people out there that voted for President Trump that are behind him that are angry and they are mad.”

Among the religious right luminaries who have signed onto Graham’s crusade are ex-Rep. Michele Bachmann, hate-group leader Tony Perkins and failed presidential candidate Mike Huckabee. There’s also Jerry Falwell Jr., who on occasion takes a break from religion to fulfill the entrepreneurial dreams of poolboys.

It’s safe to say that the 250+ signatories to Graham’s call represent the richest vein of anti-LGBTQ bias extent in American politics today.

Imploring God to “embolden” Trump is an invitation for the president to indulge his worst excesses with the blessing — literally — of the Almighty. The Day of Prayer is meant to sanctify the very behavior that people of faith would otherwise be expected to condemn. Here’s just a short rundown of all the awful (some would say sinful) things that Trump has done:

Spoke glowingly about sexual assault. The Access Hollywood tape, in which Trump boasted about grabbing women by their genitals, shows a man who hardly comports with Biblical virtues of modesty and respect for women.

Lied, lied, and lied. Really, where to begin? Lying is the language Trump speaks most fluently. Even by politician standards, Trump is an outlier. According to the Toronto Star, the media outlet most closely tracking Trump’s falsehoods, Trump has made more than 4,900 false claims since taking office. And that’s only through April of this year. He’s lied about the border wall (it’s not being built), employment (not as good as he boasts), expanded manufacturing in the U.S. (not happening) and virtually anything to do with the Mueller investigation. Speaking of which…

Obstructed justice. While this is a judgment call that only Congress can make, Special Counsel Robert Mueller hinted very broadly that Trump’s actions to impede Mueller’s investigation merited an obstruction of justice charge. In short, Trump apparently broke the law, multiple times, to protect himself.

Used his charity as a personal checkbook. Giving to the poor and needy is a Christian virtue, one that Trump doesn’t practice. His Foundation had all the earmarks of an operation that gave to no one other than Trump and his cohorts. Money from the Foundation was used to pay for a legal dispute and to buy a portrait of Trump that was then hung in one of his golf clubs. As for actual charities, there’s not much evidence that they got anything. The one time Trump made a public boast about raising money for charities to help veterans, he had to be shamed into actually paying up.

Cheated people out of their money. Trump University was a scam from start to finish, with Trump telling students that he “handpicked” instructors, when he did no such thing. Instead, he profited from a high-pressure sales machine that took as much money from attendees as possible without turning them into the real estate entrepreneurs that they were promised to become. There’s also Trump’s habit of stiffing contractors, refusing to pay them for services rendered simply so he can keep the money for himself.

These are just the violations of morality that don’t involve policy. From the Muslim ban to the attacks on LGBTQ rights, Trump has been on a tear to harm people in ways many voters would describe as immoral.

For the religious right, of course, these actions are a feature, not a bug. Graham and other conservative religious leaders see no difference between God and Trump. They’ve made a pact with the president, and they’re getting all the goodies that they want in return for their support, starting with the Supreme Court.

Of course, they aren’t the first to make that kind of a deal. It’s called a Faustian bargain, named after a man who made a deal with the devil.