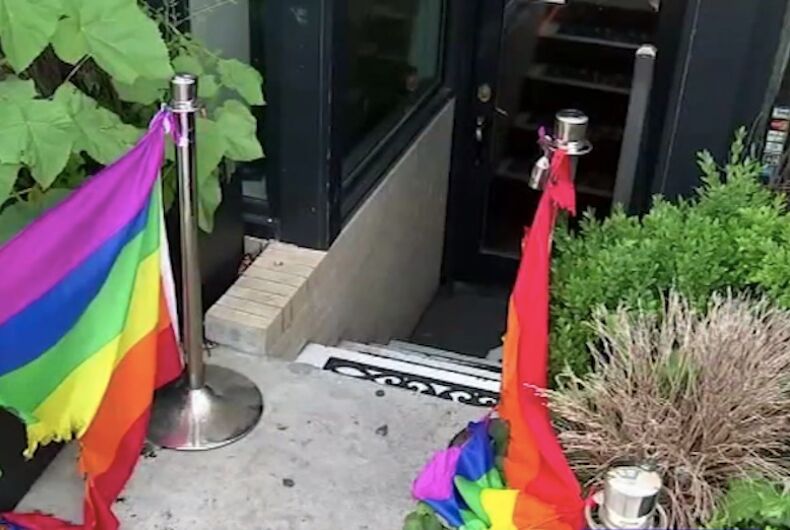 Surveillance cameras captured the sneakers of a person who walked up to the flags hanging outside the bar’s downstair entrance. The person knelt down, set fire to the flags and then walked off. Moments later, a woman notified the bar that their flags were aflame and two employees extinguished the flames.

Though no one was injured, the bar’s owner Alexi Minko told ABC 7:

“It became obvious it was a crime, a deliberate criminal act. You know you feel violated. No one was hurt but emotionally you really start to wonder. You start questioning yourself, you start wondering is it us?

What’s the reason behind it? What is happening? And you start to worry a little bit about what it means. Is there a message that somebody’s trying to send to us? So it’s a mix of emotions.”

The incident evokes an unpleasant memory of the 1973 Upstairs Lounge fire in which an arsonist set fire to the entrance of a New Orleans gay bar only to have the blaze quickly grow out of control and kill 32 people.

Disturbingly, this is only the most recent incident of a rainbow flag burned during the run-up to Pride month in the northeastern U.S.

Around May 10, 2019, someone burned a rainbow flag hanging outside of a Baltimore, Maryland boutique named Same Gender Love. Security camera footage captured two men running away after setting the flag ablaze. The boutique’s manager reportedly ran outside to find the flag still smoldering shortly after.

The boutique’s owner Marva Laws told The Baltimore Sun, “My first reaction was full of emotion. I was very angry because this is mine. It belongs to me. Of course I took it personally. My second reaction, after I think about it, is I feel sorry for whoever did it. What statement are you making, other than showing that somebody ignorant walked past my store?”

Police opened up a hate crime investigation into that incident as well.