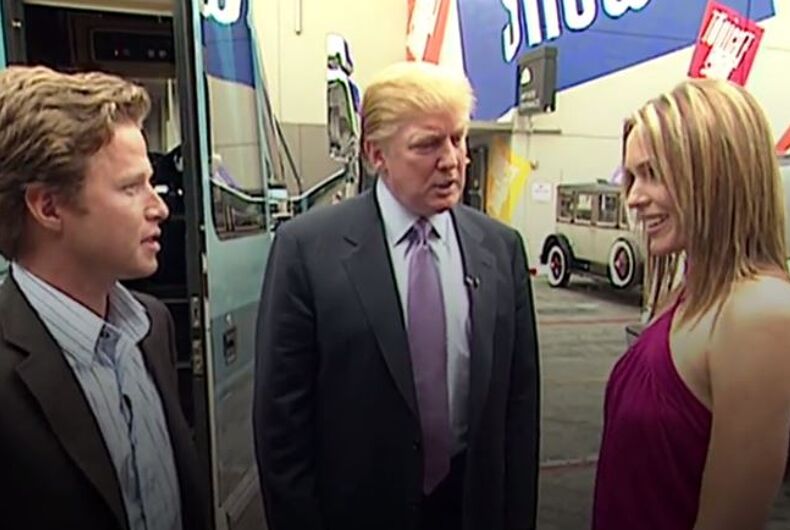 A video obtained by the Washington Post shows anti-LGBTQ Republican candidate for president Donald Trump bragging about kissing, groping and trying to have sex with women, in a conversation that was recorded 11 years ago with a TV personality. It should be noted that the words he says on the tape are likely not safe to be played at work or in front of children.

The words, which are heard on the video even though Trump himself is not seen uttering them, include fuck, bitch, and most shocking of all, “grab them by the pussy.”

Although the video surfaced Friday with just over a month before election day, it’s apparently been languishing somewhere since 2005, when a hot microphone caught the then-reality TV star crudely chatting about women with NBC TV personality Billy Bush.

Of course, this isn’t the first time the GOP nominee has been recorded making disparaging remarks about women, most often including out comedian Rosie O’Donnell.

In this 2005 video, Trump says to the former Access Hollywood correspondent is that he thinks he can kiss any woman because of his celebrity status. “When you’re a star,” he told Bush, “they let you do it. You can do anything.”

“Whatever you want,” another man said, apparently Bush.

“Grab them by the pussy,” Trump says. “You can do anything.”

In another conversation, Trump is heard to boast of an unnamed woman he tried to seduce. This was recorded a few months after marrying his third and current wife, Melania:

“I did try and f— her. She was married. And I moved on her very heavily. In fact, I took her out furniture shopping. She wanted to get some furniture. I said, ‘I’ll show you where they have some nice furniture. I moved on her like a bitch, but I couldn’t get there. And she was married. Then all of a sudden I see her, she’s now got the big phony tits and everything. She’s totally changed her look.”

Trump himself issued an apology in a statement to the Post:“This was locker room banter, a private conversation that took place many years ago. Bill Clinton has said far worse to me on the golf course – not even close,” Trump said, adding an apology, something he has almost never said in response to any of his many controversial remarks: “I apologize if anyone was offended.”

Bill Clinton, incidentally, is not running for office, so his remarks on a golf course or anywhere for that matter are irrelevant. His wife, Democratic presidential nominee Hillary Clinton, has made both women’s issues and LGBTQ rights a centerpiece of her campaign. Although she is taking time off the campaign trail to prepare for Sunday night’s second presidential debate, Clinton was swift to respond to the video via Twitter:

This is horrific. We cannot allow this man to become president. https://t.co/RwhW7yeFI2

The Post reported that it appeared Trump had been caught on tape in a private moment, “with no audience beyond Bush and a few others on the bus.” Trump was en route to record a cameo on a soap opera.