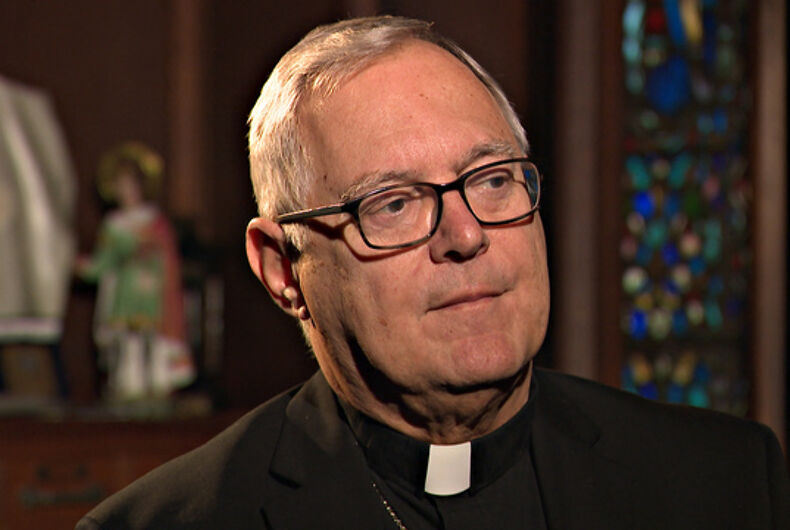 On Saturday, Bishop Thomas J. Tobin, a Roman Catholic leader who by his own admission ignored incidents of child sexual abuse when they occurred in his church, tweeted the following message:

A reminder that Catholics should not support or attend LGBTQ “Pride Month” events held in June. They promote a culture and encourage activities that are contrary to Catholic faith and morals. They are especially harmful for children.

The Huffington Post explains why this is particularly rich coming from Tobin (who has made various anti-gay comments in the past):

Tobin’s particularly harsh warning stunned many, especially given the Catholic Church’s history of child sexual abuse. The U.S. Catholic Church revealed Friday that allegations of child sex abuse by clerics more than doubled to 1,455 in its latest 12-month reporting period, and that spending on victim compensation and child protection efforts topped $300 million.

A scathing grand jury report last year said the Catholic Church covered up decades of sexual abuse of some 1,000 victims by more than 300 priests in Pennsylvania, where Tobin was formerly posted. He served for four years in the ’90s as auxiliary bishop of Pittsburgh, one of six Pennsylvania dioceses covered in the report.

This last August, Tobin said he was “aware of incidents of sexual abuse when they were reported to the diocese,” but added that addressing them were outside of his responsibilities, even though he could’ve notified the police, the press, parents or pretty much anyone else rather than staying silent about it.

“We woke up this morning and we saw the bishop’s tweet and were honestly flabbergasted. He is like the Donald Trump of the Catholic Church, he goes on Twitter and spews out hate. There’s so much hate in this world, and Pride is all about love.”

“Rhode Island Pride respectfully calls on Bishop Tobin to do some self-reflection as the majority of Catholic Rhode Islanders in this state reject the idea that to be Catholic is to be complicit to intolerance, bigotry, and fear. Many Catholics are LGBTQIA+ and allies to our community, who participate in the love and diversity that is Rhode Island Pride.”

Lazzerini and his organization have organized a protest against Tobin this evening at 6:30 p.m., in front of the Cathedral of Saints Peter and Paul in Providence.