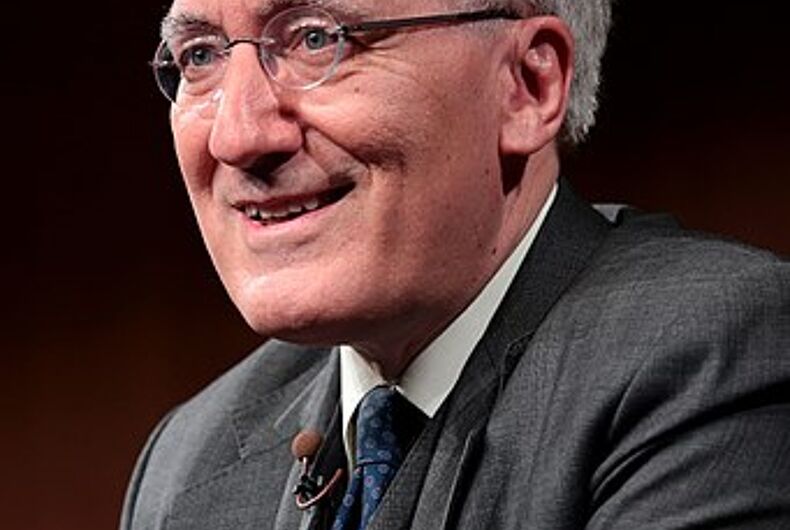 Anytime the Trump administration announces an initiative on human rights, you can bet it’s not about expanding them. That’s obviously the case with the new advisory panel meant to look at rights in the context of “natural law,” a code phrase for anti-LGBTQ prejudice.

There’s plenty of reason to be skeptical of the panel, starting with the fact that it originated under Secretary of State Mike Pompeo’s watch. Pompeo has a well-documented hatred of LGBTQ rights and is such a stalwart among conservative evangelicals that he might as well be named Secretary of the Rapture.

But the real tip off is that the man behind the concept that “natural law” should determine human rights — or at least a right-wing definition of it — is Robert George, a professor of jurisprudence at Princeton University. George is the co-founder of the National Organization for Marriage (NOM),the nation’s leading (and failed) anti-marriage equality group that now fights LGBTQ rights here and abroad.

The New York Times has described George as “the conservative-Christian big thinker.” George channels Thomas Aquinas, the 13th century friar who posited that certain rights are endowed “by nature,” meaning from God. Aquinas was tremendously influential on Christian philosophy, and his concept of natural law became a cudgel used against homosexuality on the grounds that sex that didn’t lead to children was against God’s plan.

Meanwhile, in the 21st century, George has managed to tie his natural law crusade to conservative politics. With the weight given him by his academic credential, George has been the g0-to intellectual for the anti-LGBTQ right. He is the author of the Manhattan Declaration, a document endorsed by 150 religious leaders, that calls for people to civil disobedience in opposition to marriage equality and a woman’s right to choose.

George’s disdain for marriage equality led him to co-found NOM in 2007. The following year, NOM claimed success for its involvement in California’s successful Proposition 8, which banned same-sex marriages. It was all downhill from there. Within seven years, the Supreme Court had legalized marriage equality, and now two-thirds of Americans support it.

With the failure of NOM and its allies to stop marriage equality outright, they have since turned to efforts to erode it. The primary vehicle for that effort is the “religious freedom” argument. George has long been the leader of the religious freedom charge, arguing that religion is a public good that deserves protection, if not prioritization.

As you would expect, George is well networked in the religious right universe. He has served on the boards of the hate-group Family Research Council, the Becket Fund for Individual Liberty and the Center for Individual Rights,

George is politically connected as well. A constellation of conservative powerhouses, from the late Supreme Court Justice Antonin Scalia to former Bush strategist Karl Rove, have praised him. In 2013, then-House Speaker John Boehner appointed George to the U.S. Commission on Religious Freedom.

“If there really is a vast right-wing conspiracy, its leaders probably meet in George’s kitchen,” the conservative Catholic journal Crisis once wrote.

Amazingly, George has managed to maintain cordial relations with liberal academics. He and Cornel West have been holding a series of events where they discuss everything from the purpose of a liberal education to civility on campus.

If you think that means George’s opposition to marriage equality relies on gentle argument, think again. Same-sex relationships have “no intelligible basis in them for the norms of monogamy, exclusivity and the pledge of permanence,” George has said. As for transgender people, “There are few superstitious beliefs as absurd as the idea that a woman can be trapped in a man’s body,” says George.

George was no fan of Trump. He endorsed Ted Cruz in his failed 2016 presidential bid. But George fits right into the Trump administration’s crusade to roll back LGBTQ progress. It seems to be the one thing that absolves his past hesitation about the supporting the president.